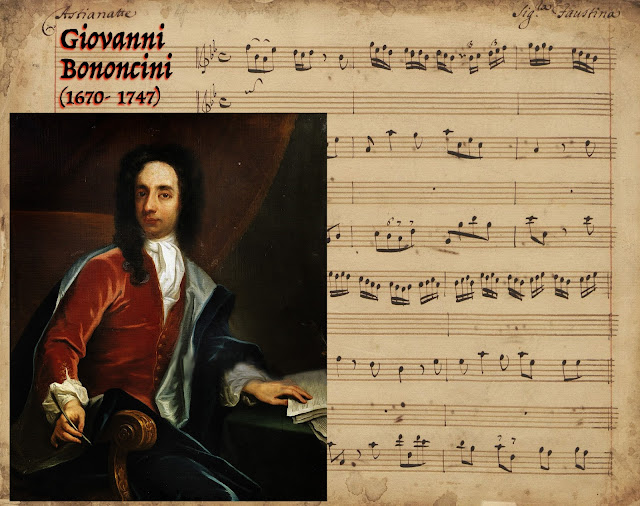 “Music happens to be an art form that transcends language.” - Herbie Hancock

Giovanni Bononcini (also spelled Buononcini - born July 18, 1670, Modena, Duchy of Modena—died July 9, 1747, Vienna) is a composer, chiefly remembered as Handel’s rival in England. He studied with his father, composer and theoretician Giovanni Maria Bononcini, and later at Bologna. Precocious musical gifts won him his first appointment, as a cellist, in 1687, and he soon became maestro di cappella of S. Giovanni in Monte.

He moved to Rome about 1691 and in 1698, after a brief period in Venice, settled in Vienna with his brother, the composer Antonio Maria Bononcini. In 1720 he was invited to London by the new operatic organisation, the Royal Academy of Music. His rivalry with Handel and their backing by opposed political and social factions ended in defeat for Bononcini. His backers were a group of noblemen; Handel was backed by the king.

A three-act opera, “Muzio Scevola”, was looked upon as a public competition, with Bononcini and Handel composing the second and third acts, respectively. Handel was judged the winner. This reverse and others led to Bononcini’s loss of support. Eight of his operas were produced in London, the most successful being “Astarto”, “Crispo”, and “Griselda”. Other compositions of this period include an anthem on the death (1722) of the Duke of Marlborough and harpsichord and chamber music.

In the early 1730s he went to Paris, leaving England in disgrace after submitting to the Academy of Ancient Music as his own composition a madrigal actually written by Antonio Lotti. His last work, “Te Deum”, was written in Vienna in the 1740s. Though he was a prolific and gifted composer, Bononcini’s abilities are dwarfed by comparison with Handel’s. Only in opera, where both used the same highly conventionalised idiom, are the two men comparable. Nonetheless, Bononcini achieved a simple and fluent melodic style and the ability to write well for his singers.