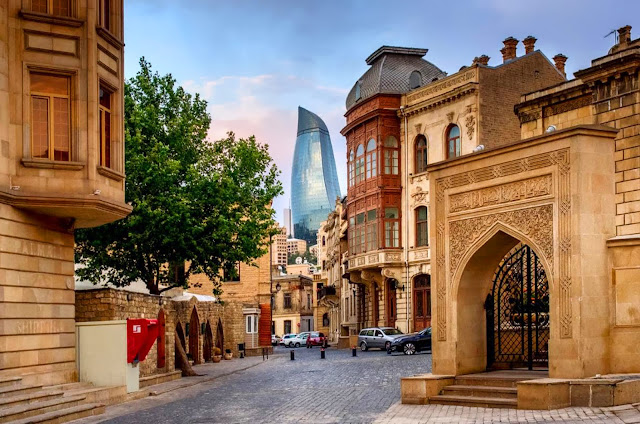 “There have always been people who have felt the necessity of change earlier than others. And this is critical for every society. Nothing is more important than human initiative and the freedom to create… To find and support such people is the great task of literature and art.” - Rustam Ibrahimbeyov

Welcome to the Travel Tuesday meme! Join me every Tuesday and showcase your creativity in photography, painting and drawing, music, poetry, creative writing or a plain old natter about Travel.
There is only one simple rule: Link your own creative work about some aspect of travel and share it with the rest of us.
Please use this meme for your creative endeavours only.
Do not use this meme to advertise your products or services as any links or comments by advertisers will be removed immediately.

At the beginning of 2009, Baku’s urban population was estimated at just over two million people. Officially, about 25 percent of all inhabitants of the country live in Baku’s metropolitan area. Baku is divided into eleven administrative districts (raions) and 48 townships. Among these are the townships on the islands of the Baku Archipelago, and the town of Oil Rocks built on stilts in the Caspian Sea, 60 kilometres away from Baku.

The Inner City of Baku, along with the Shirvanshah’s Palace and Maiden Tower, were inscribed as a UNESCO World Heritage Site in 2000. According to the Lonely Planet’s ranking, Baku is also among the world’s top ten destinations for urban nightlife. The city is the scientific, cultural and industrial centre of Azerbaijan. Many sizeable Azerbaijani institutions have their headquarters there.

The Baku International Sea Trade Port is capable of handling two million tons of general and dry bulk cargoes per year. In recent years, Baku has become an important venue for international events. It hosted the 57th Eurovision Song Contest in 2012, the 2015 European Games, the 2016 European Grand Prix and will host the 4th Islamic Solidarity Games in 2017 and UEFA Euro 2020. The city is renowned for its harsh winds, which is reflected in its nickname, the “City of Winds”.

Baku has wildly varying architecture, ranging from the Old City core to modern buildings and the spacious layout of the Baku port. Many of the city’s most impressive buildings were built during the early 20th century, when architectural elements of the European styles were combined in eclectic style. Baku thus has an original and unique appearance, earning it a reputation as the “Paris of the East”. In the last decade, countless towers have mushroomed, dwarfing or replacing tatty old Soviet apartment blocks. Some of the finest new buildings are jaw-dropping masterpieces.

Add your own travel posts using the Linky tool below, and don't forget to be nice and leave a comment here, and link back to this page from your own post:
Posted by Intelliblog at 03:26