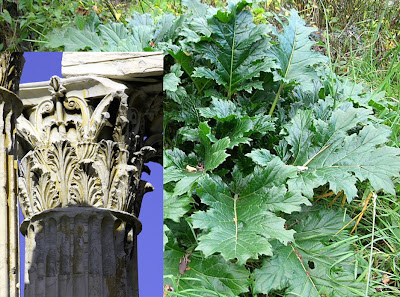 Today the sun enters the zodiac sign of Capricorn, and will remain there until it exits it on January 20th. Capricorn is ruled by Saturn and is a cardinal, feminine, negative, earth sign. Polar or opposite sign is Cancer. Its fixed Star is Algiedi.

Adjectives that characterise Capricornians are: Aloof, Ambitious, Calculating, Careful, Competitive, Cool, Dependable, Dogged, Earnest, Goal-setting, Patient, Practical, Prudent, Quiet, Self-disciplined, Serious, Tough. The Capricornian may be summarised with the verb: “I utilise”. A mountain top, a great father figure, the boss, the executive. A Capricornian quote: “I will be lord over myself.”

Acanthus, Acanthus spinosus is the birthday flower for today. It signifies in the language of flowers “love of art” and that nothing will separate the giver and the receiver. The astrologers say that acanthus is ruled by the moon. Acanthus leaves served as the inspiration of the Corinthian order of Greek column capitals.

Seeing that I have mentioned the “orders of architecture”, I may as well take that as my subject for Art Sunday. Orders of architecture indicate in any of several styles of classical or Neoclassical architecture, building styles that are defined by the particular type of column and entablature they use as a basic unit. The form of the capital (topmost part of the column) is the most distinguishing characteristic of a particular order. There are five major orders: Doric, Ionic, Corinthian, Tuscan, and Composite.

The unit used in the measurement of columns is the diameter of the shaft at the base; thus, a column may be described as being eight (lower) diameters high. Ancient Greek architecture developed three distinct orders, the Doric the Ionic, and the Corinthian capital, which were adopted and slightly modified by the Romans in the 1st century BC and have been used ever since in Western architecture.

The Doric order is characterized by a slightly tapered column that is the most squat of all the orders, measuring in height (including the capital) only about four to eight lower diameters. The Greek forms of the Doric order have no individual base and instead rest directly on the stylobate (topmost “step” of the base of the building), although subsequent forms of Doric frequently were given a conventional plinth-and-torus base. The Doric shaft is channeled with 20 shallow flutes. The capital, as stated before, consists of a simple necking; a spreading, convex echinus; and a square abacus. The frieze section of the Doric entablature is distinctive. It is composed of projecting triglyphs (units each consisting of three vertical bands separated by grooves) that alternate with receding square panels, called metopes, that may be either plain or carved with sculptured reliefs. The Roman forms of the Doric order have smaller proportions and appear lighter and more graceful than their Greek counterparts. The Greek Doric order is characterised as being masculine and virile in its appearance. The prime example of the Doric order is the Parthenon of the Acropolis of Athens.

The Ionic order differs from the Doric in having more flutes on its shaft and in the scrolls, or volutes, that droop over the front and rear portions of the echinus in the capital. The echinus itself is carved with an egg-and-dart motif. The height of the entire Ionic order—column, base, capital, and entablature— is nine lower diameters. The base of the column has two tori (convex moldings) separated by a scotia. The shaft, which is eight lower diameters high, has 24 flutes. On the entablature, the architrave is usually made up of three stepped bands. The frieze lacks the Doric triglyph and metope, and hence this area can hold a continuous band of carved ornament, such as figural groups. The Ionic order is described as being feminine and graceful in its general appearance.

The Corinthian order is the most elegant of the five orders. Its distinguishing characteristic is the striking capital, which is carved with two staggered rows of sylised acanthus leaves and four scrolls. The shaft has 24 sharp-edged flutes, while the column is 10 diameters high. This order is the most lavish and opulent and gives a general appearance of richness and luxury, even decadence.

The Tuscan order is a Roman adaptation of the Doric. The Tuscan has an unfluted shaft and a simple echinus-abacus capital. It is similar in proportion and profile to the Roman Doric but is much plainer. The column is seven diameters high. This order is the most solid in appearance of all the orders.

The Composite order, which was not ranked as a separate order until the Renaissance, is a late Roman development of the Corinthian. It is called Composite because its capital is composed of Ionic volutes and Corinthian acanthus-leaf decoration. The column is 10 diameters high.

The Doric and Ionic orders originated nearly simultaneously on opposite shores of the Aegean Sea; the Doric on the Greek mainland and the Ionic in the Greek cities of Asia Minor. (The volutes of the Ionic capital were adapted from Phoenician and Egyptian capital designs.) The Doric may be considered the earlier order of the two only in its developed form. Both orders originated in temples constructed out of wood. The earliest well-preserved example of Doric architecture is the Temple of Hera at Olympia, built soon after 600 BC. From these beginnings, the evolution of the stone Doric column can be traced in architectural remains in Greece, Sicily, and southern Italy, where the Doric was to remain the chief order for monumental buildings for the next eight centuries.

The Greeks as well as the Romans regarded the Corinthian as only a variant capital to be substituted for the Ionic. The first known use of a Corinthian capital on the outside of a building is that of the choragic Monument of Lysicrates (Athens, 335/334 BC). The Corinthian was raised to the rank of an order by the 1st-century-BC Roman writer and architect Vitruvius.

The Romans adopted the Doric, Ionic, and Corinthian orders and modified them to produce the Tuscan order, which is a simplified form of the Doric, and the Composite order, which is a combination of the Ionic and Corinthian orders. Another Roman innovation was the superposed order; when columns adorned several successive stories of a building, they were normally of different orders, in an ascending sequence from heaviest to most slender. Thus columns of the Doric order were assigned to the ground floor of a building, Ionic ones to the middle story, and Corinthian or Composite ones to the top story. To avoid the complications of separate orders for each story, the architects of the Renaissance invented the Colossal order, which is composed of columns extending the height of two or more stories of a building.
Posted by Intelliblog at 21:42