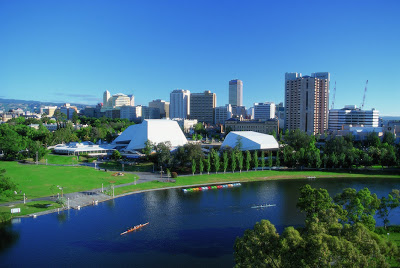 “We wander for distraction, but we travel for fulfillment.” Hilaire Belloc

Quite on the spur of the moment we decided to come to Adelaide. I got quite a good deal on the internet and we flew in yesterday evening. We have friends here, so it’s always nice to visit. We like the rather laid back atmosphere, which is at the same time cosmopolitan and almost Mediterranean lifestyle. There is quite a lot to do and see here.

Adelaide is the capital of the state of South Australia. Situated at the base of the Mount Lofty Ranges, 14 km inland from the centre of the eastern shore of the Gulf St. Vincent, it has a Mediterranean climate with hot summers mild winters and a fairly low average annual rainfall. The site of the city was chosen in 1836 by William Light (the colony's first surveyor general), and is on slightly rising ground along the Torrens River, which divides it into a southern business district and a northern residential section. The city is separated from its suburbs by extensive areas of lush parklands. It is named after Queen Adelaide, consort of the British king William IV, and it was incorporated as Australia's first municipal government in 1840, but the city council ran into considerable debt and became defunct in 1843. Adelaide was thereafter controlled by the provincial government until 1849, when a city commission was formed. A municipal corporation was reestablished in 1852, and the city gained a lord mayoralty in 1919.

The fertility of the surrounding plains, easy access to the Murray lowlands to the east and southeast, and the presence of mineral deposits in the nearby hills all contributed to the city's growth. As an early agricultural marketing centre, it handled wheat, wool, fruits, and wine. Adelaide, aided by its central position and a ready supply of raw materials, has since become industrialized, with factories producing automobile components, machinery, textiles, and chemicals. A petroleum refinery was completed in 1962 at Hallet Cove, south of Adelaide near Port Noarlunga; a second refinery has also been completed. Adelaide is connected by pipeline with the Gidgealpa natural-gas fields in Cooper Basin, northeastern South Australia. A focus of rail, sea, air, and road transportation, Adelaide receives the bulk of the products of the lower Murray River valley, which has no port at its mouth. Adelaide's own harbour facilities are at Port Adelaide, 7 miles (11 km) northwest.

Notable city landmarks include the University of Adelaide (founded in 1874), Parliament and Government houses, the Natural History Museum, and two cathedrals: St. Peter's (Anglican) and St. Francis Xavier's (Roman Catholic). The biennial Adelaide Festival of Arts (instituted in 1960) was the first international celebration of its kind to be held in Australia. Population of the metropolitan area is about 1.2 million people.

We spent the day in a leisurely way, firstly ambling around Melbourne St in North Adelaide where our hotel is. Then a short walk through parklands in towards the City, we stopped at the Festival Centre (the white polygonal building in the photograph) and had a cup of coffee by the riverside (River Torrens). Then into the City, where we walked down Rundle Mall and finally we took the tram to the busy cosmopolitan seaside suburb of Glenelg where we had a delicious lunch. We came back to our hotel and our friends came to pick us up to go out to dinner.
Posted by Intelliblog at 02:34