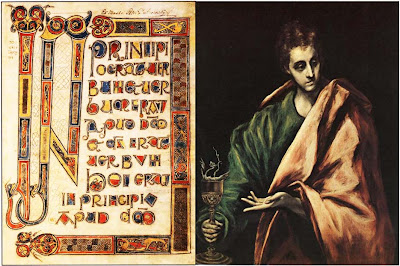 “If you hate a person, you hate something in him that is a part of yourself. What isn't part of ourselves doesn't disturb us.” - Hermann Hesse

The plant for today’s birthday is the ash, Fraxinus excelsior. It is a symbol of grandeur, nobility, adaptability and modesty. The language of flowers it speaks the words: “With me you are safe”.

It is St John’s Feast Day today, for the Roman Catholic church. St John the Evangelist was the disciple that Christ loved the most. He is the author of the fourth Gospel, three Epistles and the Revelation. He and his brother James the Greater were sons of Zebedee. His symbol as an evangelist is the eagle and he is the patron saint of authors, publishers, printers and booksellers. The Gospel according to John is clearly different from the other three Synoptic Gospels. John may have used the Gospels of Mark and Luke as his sources. The evangelist has two aims in the Gospel: To show that Christ is the vital force in the Universe forever, and that He lived on earth to reveal Himself in the flesh. This Gospel is by far the most literary of all four and in a philosophical prologue, Jesus is identified with the Word (Logos).

The Apocalypse or Revelation is the 27th and last book of the New Testament, written around 95 AD on the Greek island of Patmos by one John; whether he was the St. John the Apostle or another John, is disputed. This work is mysterious and prophetic consisting mainly of visions and dreams that show allegorically the end of evil and the triumph of God. The careful plan depends heavily on patterns of sevens, e.g, letters to seven churches in Asia Minor and the opening of the seven seals on the scroll in the hand of God. The style is majestic, with constant allusion to Old Testament prophecies, especially those of Ezekiel, Daniel, and Isaiah. It has been a very influential work and numerous interpretations of it have appeared from the earliest of times.

On this, St John’s Day, people who were afraid of being poisoned went to church and drank from a chalice of blessed wine, this supposedly protecting them from the effects of poison. The tradition arose from an apocryphal legend that recounts how St John was offered a cup of poisoned wine and he, well aware that it was poisoned, drained it after making the sign of the cross over it.

Today we flew to Adelaide for a four-day holiday. Adelaide is a beautiful city and we always enjoy visiting here and catching up with some old friends. More tomorrow!

apocalypse |əˈpäkəˌlips| noun (often the Apocalypse)
The complete final destruction of the world, esp. as described in the biblical book of Revelation.
• an event involving destruction or damage on an awesome or catastrophic scale : A stock market apocalypse | An era of ecological apocalypse.
• ( the Apocalypse) (esp. in the Vulgate Bible) the book of Revelation.
ORIGIN Old English , via Old French and ecclesiastical Latin from Greek apokalupsis, from apokaluptein ‘uncover, reveal,’ from apo- ‘un-’ + kaluptein ‘to cover.’
Posted by Intelliblog at 01:25