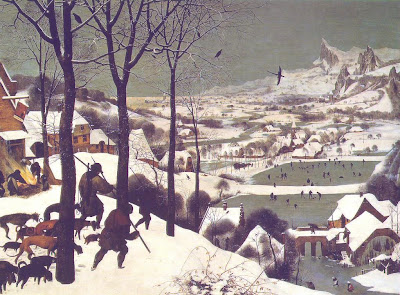 And here is a poem inspired by the painting:

Hunters in the Snow: Brueghel
By Joseph Langland

Quail and rabbit hunters with tawny hounds,
Shadowless, out of late afternoon
Trudge toward the neutral evening of indeterminate form
Done with their blood-annunciated day
Public dogs and all the passionless mongrels
Through deep snow
Trail their deliberate masters
Descending from the upper village home in lovering light.
Sooty lamps
Glow in the stone-carved kitchens.

This is the fabulous hour of shape and form
When Flemish children are gray-black-olive
And green-dark-brown
Scattered and skating informal figures
On the mill ice pond.
Moving in stillness
A hunched dame struggles with her bundled sticks,
Letting her evening's comfort cudgel her
While she, like jug or wheel, like a wagon cart
Walked by lazy oxen along the old snowlanes,
Creeps and crunches down the dusky street.
High in the fire-red dooryard
Half unhitched the sign of the Inn
Hangs in wind
Tipped to the pitch of the roof.
Near it anonymous parents and peasant girl,
Living like proverbs carved in the alehouse walls,
Gather the country evening into their arms
And lean to the glowing flames.
Now in the dimming distance fades
The other village; across the valley
Imperturbable Flemish cliffs and crags
Vaguely advance, close in, loom
Lost in nearness. Now
The night-black raven perched in branching boughs
Opens its early wing and slipping out
Above the gray-green valley
Weaves a net of slumber over the snow-capped homes.

And now the church, and then the walls and roofs
Of all the little houses are become
Close kin to shadow with small lantern eyes.
And now the bird of evening
With shadows streaming down from its gliding wings
Circles the neighboring hills
Of Hertogenbosch, Brabant.
Darkness stalks the hunters,
Slowly sliding down,
Falling in beating rings and soft diagonals.
Lodged in the vague vast valley the village sleeps.


And here is Kyung-Wha Chung who plays and conducts Vivaldi's “Winter” from the Four Seasons, with a group of young musicians she herself got together and trained. Filmed in 1997.