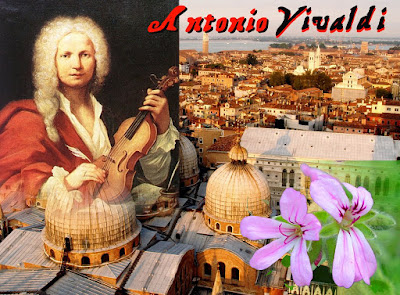 “Music is the shorthand of emotion.” - Leo Tolstoy

Today is a special day for the world of music as it is the anniversary of the birth of the famous Venetian composer, Antonio Vivaldi (1678-1741). Antonio Vivaldi was aged fifteen and a half when he received the tonsure, and grew up to become the prete rosso (“red priest”) of Venice, so called on account of his red hair. Although he remained a deeply religious man, he stopped saying Mass soon after his ordination; later in life he cited a long-term ailment as the reason for this (probably asthma). From September 1703 to February 1709 he was violin teacher at the Pio Ospedale della Pietà in Venice (an orphanage for girls which offered musical training). In addition to teaching violin, directing, and composing instrumental works, Vivaldi also taught the viole all' inglese and was responsible for acquiring and maintaining string instruments for the orchestra.

By this time he had begun to establish himself as a composer He was an avid traveller and one of the most prolific composers of his time, having written over 350 concerti, many church compositions and numerous operas. His popularity in Venice had declined considerably by 1739, and this may have prompted him to travel to Vienna, where he arrived by June 28, 1741. He died there the following month, and was given a pauper's burial at the Hospital Burial Ground.

Vivaldi was most influential as a composer of instrumental music, particularly concertos, in which his regular use of ritornello form in the fast movements and of a three-movement plan were influential. A skillful orchestrator, he favored effects such as muting and pizzicato. A number of his orchestral works are programmatic, the best-known examples being the concertos Il Gardellino, La tempesta di mare, and Le quattro Stagioni (The Four Seasons) of Opus 8.

One of his concertos that I particularly like is the concerto in A minor for two violins, opus 3 no 8. It has a brilliant first movement that is rich in ideas that contrast between themselves and contains a lyrical theme despite the rapid allegro marking. The second movement is marked larghetto e spiritoso, contrasting again the lyrical beauty of the theme and the accompanying ostinato style. The last movement is another allegro, but this time less structured with the two solo violins conversing and arguing in succession. Johann Sebastian Bach seems to have also admired this concerto as he transcribed it, amongst others of Vivaldi, for keyboard.

The rose geranium, Pelargonium capitatum, is the birthday flower for this day. When bruised, the leaves exude a rose-like scent. In the language of flowers, it stands for preference.
Posted by Intelliblog at 01:30