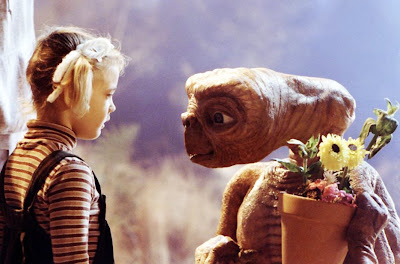 Last week we visited some friends of ours. Their 8 and 10 year-old children who are right into Harry Potter, Lord of the Rings, A Series of Unfortunate Events, Artemis Fowl, etc were surprisingly ignorant on the subject of E.T. This was a matter of great wonder to us “oldies” and it was only on reflection that we all realised that this is a 1982 film! Ancient history to these children, who weren’t even a twinkle in their father’s eye when the film was released. Well we rectified the situation and gave them a DVD of E.T. as a gift. The following film review of Steven Spielberg’s “E.T.: The Extraterrestrial” (1982) is by Kate (8 years) with some help from John (10 years), put on here with their permission (I have edited it slightly, correcting some spelling errors):

“ET: EXTRA-TERRESTRIAL
My name is Kate and I am 8 years old. I have a brother John who is 10 and a dog called Jerry (he’s 2 years old). Nick gave us a DVD called ET. He said that they had watched this when he and his friends were young and they liked it. This was a sad movie. I cried when I watched it and John nearly did but he didn’t in the end because he’s a boy. I told him it was OK because Elliott cried too, when ET was leaving and Elliott and his brother cried too. But it was funny too and adventurous.

ET is a spaceman who comes to earth from far away from his home planet. It’s very, very far away. I think ET is a kid and he wandered off his parents’ spaceship when they came to have a picnic on earth and they forgot to take him with them. John said ET wasn’t a kid, but he was a scientist who was absent-minded and he forgot to go back to the spaceship on time, that’s why they left without him.

Elliott is a little boy who has an older bother called Michael and a little sister called Gertie. They find ET in their shed and they get a real big fright. ET got a fright too. Eliott becomes friends with ET and teaches him to speak English. If I was Eliott I’d get ET to teach me spacetalk and nobody would understand what we said when we talked. I liked this part of the film because it was funny. ET got drunk when was drinking beer and Elliott got drunk too because he felt like ET felt.

ET wanted to go home and he wanted to phone home for his parents to come and get him. He couldn’t use a phone because it was too far and because mobile phones weren’t invented then. This was in the old times. ET got Eliot to give him stuff and he made a special big phone to call his parents. They had to go into the forest on top of a mountain to do that because it was closer to ET’s home. ET phoned home but both Elliott and ET got sick because they stayed out all night (it was Halloween). But Elliott got into real big trouble with his Mum and the police because he stayed out at night. The police were really creepy and scary, the way they came into Elliot’s house. And the spacemen were scary too, but these spacemen were from earth and looking for ET. Elliot’s mum went ballistic when she found all these strange people in her house looking for ET.

ET died but not for real. I think he was trying to pretend he was dead so he could escape. Elliott found out that ET wasn’t dead and they (him and his brother) took ET away in a truck. Michael was too young to drive and he was going all over the road and nearly crashed. It was funny how the police couldn’t catch them. But then they had to get on their bikes to get away. They had really good mountain bikes and ET helped them get away by making them fly. I wish I could have a friend like ET who would help me fly like that on my bike. John says it was the power of our brains. John says you can do anything you really, really want if you think about it really hard. I don’t think I can think that hard so I can fly. Anyway, ET found his parents’ spaceship and he went away back home. It was so sad for Elliott and his family. But I was happy for ET too because he went back home. This was a really ace movie. Thank you for the present Nick, we’ll watch it again.”

Well there you have it, out of the mouths of babes… E.T. has two news fans, gained 26 years after it gained its first few millions. And it will go on having fans because it is a story that appeals to everyone. It’s a modern-day Lassie story, with the right amount of humour and fun and pathos and adventure and the kind of situational incident that brings out the child in every one of us.
Posted by Intelliblog at 00:53