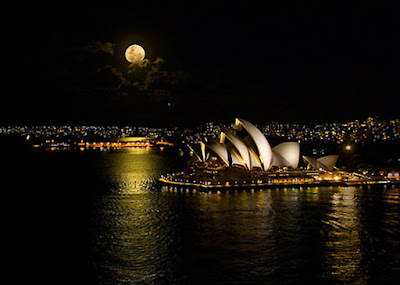 I was in Sydney for the day for work today and spent nearly the whole of the day indoors. This proved to be a good thing as the weather was wild and unseasonable. Wind, rain and cool temperatures with leaden gray skies that was more like the midst of a Sydney winter, rather than a mid-Spring day.

The poem I give you today was written just recently as the full moon filled the sky with its glowing orb.

The moon struts across the sky
Like a madwoman tonight.
She holds aloft her bright light
Looking down with a glassy eye.

The moon watches me, still,
But her tapping long fingers
Drum a tattoo, and it lingers,
Echoing, my empty room to fill.

She glares at me and spits
The stars, like orange pips;
Her furrowed sweaty brow drips
And in the garden as she sits,

The moon is on the rampage
Like Mad Meg, she rants;
Angry, she sighs and pants,
Unable to assuage her rage.

I hate the moon tonight,
Her silvery, bright light,
Her mad ways, her loud
Screeching, her crowd
Of dark, night creatures.
Her shining, dead features,
And her madwoman hair
Entangling me in her lair,
As once again I succumb
To her magic. Struck dumb,
I follow, and like a fool
Again drown in her dark pool.
Posted by Intelliblog at 00:42