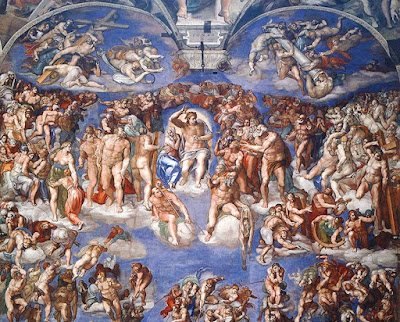 “Faith certainly tells us what the senses do not, but not the contrary of what they see; it is above, not against them.” – Blaise Pascal

An absolute gem for Song Saturday today, the “Miserere” by Allegri. Allegri's masterpiece was written sometime before 1638 for the annual celebration of the matins during Holy Week (the Easter celebration). Twice during that week, on Wednesday and Friday, the service would start at 3 a.m. when 27 candles were extinguished one at a time until but one remained burning. According to reports, the pope would participate in these services. Allegri composed his setting of the Miserere for the very end of the first lesson of these Tenebrae services. At the final candle, the pope would kneel before the altar and pray while the Miserere was sung, culminating the service. It is a setting of Psalm 50 in Latin.

I.
Have mercy upon me, O God: according to your great mercy.
Wash my sin completely from me: and cleanse me of my wickedness.
And according to the number of your mercies: wipe out my sin.
Since I know my iniquity: and my sin is always before me.
Against you only have I sinned and I have done wrong before you: that you may be
justified in your charge and be right in your judgment.
For behold I was conceived in wickedness: in sin my mother conceived me.
For behold, you loved the truth: and you made clear to me the hidden secrets of your wisdom.
You will purge me with hyssop and I will be clean: you will wash me and I will be whiter than snow.

II.
Make me hear joy and gladness: and the bones you have cast down will rejoice.
Turn your face from my sins: and wipe out all my iniquities.
Make a clean heart in me, O God: and renew an upright spirit in me.
Do not send me from your face: and do not remove your holy spirit from me.
Give back to me the joy of your salvation: and strengthen your spirit in me.
I will teach the wicked your way: and the sinners will turn to you.
Free me from bloodshed O God, the God of my salvation: and my tongue will acclaim your justice.

It was not long before Allegri's Miserere was the only such work sung at these services. With its soaring soprano parts (sung for centuries by castrati) and compelling melodic style, the work enjoyed almost immediate popularity. So impressed was some subsequent pope that the work thereafter was protected and a prohibition was placed on its use outside the Sistine Chapel at the appointed time. Chapel regulations forbid its transcription; indeed, the prohibition called for excommunication for anyone who sought to copy the work.

Leopold Mozart, visiting Rome with his 12-year-old son heard the work. The young Mozart heard the piece and wrote it down form memory. Leopold told of Wolfgang's accomplishment in a letter to his wife dated April 14, 1770 (Rome):

"…You have often heard of the famous Miserere in Rome, which is so greatly prized that the performers are forbidden on pain of excommunication to take away a single part of it, copy it or to give it to anyone. But we have it already. Wolfgang has written it down and we would have sent it to Salzburg in this letter, if it were not necessary for us to be there to perform it. But the manner of performance contributes more to its effect than the composition itself. Moreover, as it is one of the secrets of Rome, we do not wish to let it fall into other hands…"
Posted by Intelliblog at 01:11