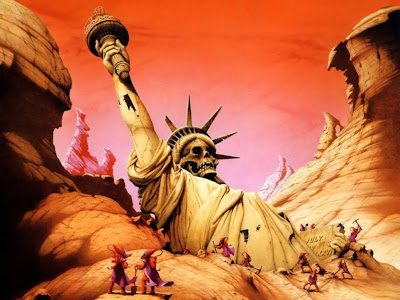 “In all nations an exceptional man exists that compensates the deficiencies of the remainder. In those moments, when humanity is found collectively in a state of decadence, there always remain those exceptional beings as point of reference.” - Augusto Roa Bastos

The more I look at the news every day, the more disheartened I get. We seem to be living in decadent times and each news item is evidence enough of this. I am reminded of the days preceding the fall of the Roman Empire. The Romans became the most civilised and most powerful people of the ancient world but the more territory they accrued, the greater their wealth, the more their power, then the greater their decadence became and they ended up easy prey of the barbarian hordes that overran their heartland and defeated them ignominiously in the late 5th century AD.

The ruthless, warlike, proud and pagan Germans rode in, trampled under their horses' hooves the few poor debauched legionnaires who remained, still foolishly fighting on foot, sacked Rome, destroyed civilisation, overthrew the last emperor in 476 AD, and ushered in the Dark Ages, from which Europe only emerged with the Renaissance, a thousand years later. Christianity eventually built a new civilisation on the ruins of the old, but only through the mediation of the Classical ideals of the Renaissance.

We are living at an age where our civilisation is once again threatened by a new Dark Age. The world domination of the world by the USA seems to be on the verge of collapse and no amount of largesse will rescue the dying behemoth of its economy. Our selfish, pleasure-centred existence with its emphasis on the here and now is inviting a degeneracy that is reminiscent of the dying days of Rome. We seem as a civilisation to have lost our sense of values, the significance of our self-respect, the importance of shame in a public context, our feeling of social justice, the value of religious observance. We have lost touch with what family really means, we have sold love to the highest bidder, we have betrayed the meaning of true friendship, we have reduced our personal relationships to the most superficial level.

We live on the surface of a soap bubble, recklessly prodding it constantly to test its fragile surface. All the while, the soap bubble is growing larger and drifting towards oblivion. Our politicians have become traitors, our countries have degenerated into people markets, money reigns supreme and human dignity is insulted non-stop. Can such a civilisation survive?

A survey of the last few days news items has left me stunned:
• The world economic crisis, with no improvement in sight

• The looming US presidential election that has become a running joke

• A New Zealand toddler put in a tumble dryer, spun on a clothesline and kicked in the head as part of ongoing abuse before she died

• A US man convicted of murdering three people, including a couple who were tied to an anchor and thrown from their yacht off the California coast

• 21 prisoners died in a jail riot in Mexico near the U.S. border on Monday, some in a fire after a gun battle between rival gangs

• Nazi flag flown in a suburban house in Adelaide

• Inane reports of inane celebrities doing inane things, over and over again, ignoring the world on the brink of the apocalypse…