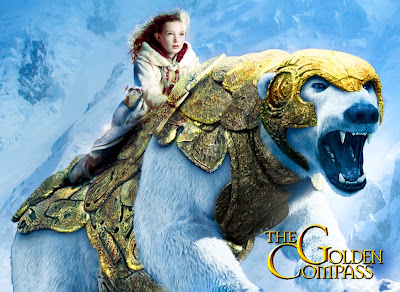 “I believe in the absolute preciousness of the here and now. Here is where we are and now is where we live.” - Philip Pullman

We watched Chris Weitz’s 2007 film “The Golden Compass” at the weekend. You may remember this caused quite a great deal of controversy when it first came out as it was thought to be quite irreverent and blasphemous, based on books with “anti-religious themes”. The books are written by Philip Pullman, a self-professed atheist and member of a number of humanist societies. “His Dark Materials” children’s book trilogy comprises “Northern Lights” (1995 = The Golden Compass), “The Subtle Knife” (1997) and “The Amber Spyglass” (2000). Pullman is a typical Oxford scholar and his children’s books correspond with C.S. Lewis’s Narnia books in that they are concerned with children plagued by difficult adult moral dilemmas, the struggle between good and evil, parallel universes, anthropomorphic animals and the quest for the meaning of existence. It is rather surprising that the controversy arose as in Pullman’s books there is no attack on religion as such, but perhaps there may be a strong criticism of dogmaticism, organised religious bureaucracy and religious intolerance.

In any case, the film shows no evidence of any atheistic doctrine and it may be enjoyed as pure and simple escapist fluff. In fact, the subtlety of the books is lost and the heavy-handed way in which the film starts with an explanation (thus stripping the plot of any mystery or wonder) does not presage well. Significant cuts in the plot are further hampered by poor character development and one feels that the whole thing is rushed with a lot of good material left on the cutting room floor. It is clear that the film is trying to ride on the crest of the success of the “Lord of the Rings”, “The Lion, the Witch and the Wardrobe”, the “Harry Potter” films, and “A Series of Unfortunate Events”. However, despite the excellent special effects and overall exceptional technical quality of the film, it does not rate as highly.

The plot in a nutshell is as follows: Lyra, a young orphan girl, lives among scholars at Oxford's Jordan College, in a parallel Universe to our own, in which every human is joined to a physical manifestation of an animal (called a daemon), which is the human’s soul. One day Lyra eavesdrops a secret conversation in which an extraordinary dust is mentioned and which is rumoured to possess profound properties that could unite whole universes. But there are those who fear the dust and would stop at nothing to destroy it. Central to the plot is the Magisterium, a totalitarian government that seeks to control the population’s thoughts as well as its actions. Children are also being kidnapped left, right and centre, and Lyra's best friend, Roger, is among them. Lyra is taken from Oxford by the sinister Mrs Coulter and is thrown into the midst of a desperate struggle of good and against evil. Lyra is forced to seek aid from witches, Gyptians, and formidable armoured bears, to help her save her friends from these evil experiments. She also has the aid of a magic golden compass, which is an alethiometer (truth meter) capable of answering any question put to it, provided one can understand its cryptic symbol answers, which are always true.

On thing about the movie that stands out are the good casting and equally good performances. Nicole Kidman is the delicious villainess Mrs Coulter, while Dakota Blue Richards does a good job as Lyra Bellacqua. Eva Green is a fetching witch and Daniel Craig a suitably aloof Lord Asriel. The music is understated and suitable, the sets exceptional and the special effects wonderful. Overall, a good film if you have not read the books, but if you have read the books it is a disappointing effort.

As far as the political or religious implications of the film are concerned, it is a satire of totaliarinism (which should keep the conservatives happy), but I could find no evidence of atheism (unless one considers the favourable view of witches portrayed, as irreligious). Perhaps I may let Pullman justify his religious convictions for himself:

“The religious impulse – which includes the sense of awe and mystery we feel when we look at the universe, the urge to find a meaning and a purpose in our lives, our sense of moral kinship with other human beings – is part of being human, and I value it. I'd be a damn fool not to. But organised religion is quite another thing. The trouble is that all too often in human history, churches and priesthoods have set themselves up to rule people's lives in the name of some invisible god (and they're all invisible, because they don't exist) – and done terrible damage. In the name of their god, they have burned, hanged, tortured, maimed, robbed, violated, and enslaved millions of their fellow-creatures, and done so with the happy conviction that they were doing the will of God, and they would go to Heaven for it. That is the religion I hate, and I'm happy to be known as its enemy.” Philip Pullman
Posted by Intelliblog at 21:11