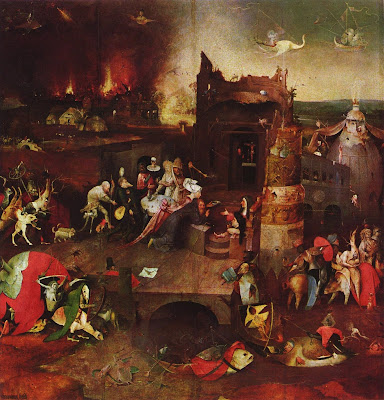 “To kill a man is not to defend a doctrine, but to kill a man.” - Michael Servetus

We live in interesting times and that reminds me of the Chinese curse: “May you live in interesting times”… Interesting because of the worldwide upheavals, economies in crisis, wars, terrorism, massive population shifts, climate change, social inequity, crumbling governments, people running amuck. Yet, ours are not the only interesting times, the history books are full of similar epochs with numerous crises and awful turmoil. It’s just that I would have thought humanity had learnt a little form past mistakes and a simple reading of history would have had a sobering effect. But who bothers to read history anymore?

The painting for this Sunday is Hieronymus Bosch’s “The Temptation of St Anthony”, a work full of terror and apprehension. Illustrative perhaps of some past “interesting times” or prophetic of the present ones.

The complete triptych depicts the Flight and Failure of St Anthony (left wing), Temptation of St Anthony (central panel) and St Anthony in Meditation (right wing). In the works of northern masters, the realistic landscapes of Italian painters are transformed into fantasy-scapes in which anthropomorphic forms mix with imaginary ones. These often accompany the usual Christian motifs, like a temptation of Saint Anthony, representing a weird mixture of legend and pure imagination. Bosch was remarkable in his choice of subject matter that allowed him to indulge his bizarre sense of the grotesque and the fantastic.
Posted by Intelliblog at 01:11