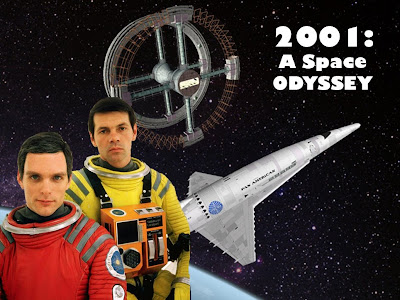 I watched Stanley Kubrick’s “2001: A Space Odyssey” (1968) again recently and was surprised at how little my appreciation of this film had changed over the years. One may have expected it to be dated and look “clunky”, however, as a vision of the future it retains a certain freshness, even though the high technology depicted is slightly antiquated. Nevertheless the film is visually rich and makes for rewarding viewing even on an abstract level, independent of the story. I was watching it rather amused as it was often described as the ultimate movie to watch on a “drug trip” – it is certainly one that stretches time and through images and music can create a heightened state during a drug-induced euphoria. Kubrick takes a great risk in attempting to capture beauty on film – whether this is an arid African landscape, a moonscape, deepest space or a depiction of the falling through a time/space discontinuity. The film is slow and builds up gradually to the climax, which is interrupted by an almost irrelevant episode of the likes of a psychological thriller.

The film has as its theme the evolution of mankind. Several million years ago some hominid apes live an animal-like existence until they encounter a rectangular black monolith that causes them to evolve into the next stage of development. Closer to the present time, the same type of mysterious monolith is discovered buried under the surface of the moon. This is the stimulus for the next stage of human development involving interplanetary travel and dependence on computers. The middle part of the film involving the mission to Jupiter and the interaction of one of the spacemen, Dave, with Hal the villainous computer is the main recognizable cinematic “plot” of the movie. It is a sparse story but directed with masterly aplomb by Kubrick. The last part of the movie concerns the interaction of Dave with yet another black monolith that heralds the next stage of human development – the space child.

The film is ground-breaking in several important cinematic ways. Its use of slowly building climaxes (which may irritate many). The use of classical music in some beautiful image sequences that serve no purpose except to cajole us into a sense of cultural appreciation of the art of movie-making. The overlapping stories linked by the common monolithic theme. The almost Hitchcokian middle part of man versus machine. And the final self-indulgent psychedelic trip that heralds the postlude of a conclusion to the film that may be misunderstood by many. The mystery surrounding the monoliths is never resolved in the film, but that an alien intelligence is responsible for them is indisputable. This contribute to the overall awe-inspiring nature of the film and contributes to the constant sense of apprehension that mounts to terror as the film winds to a close.

This is the science fiction film par excellence. A great achievement of a great director, perhaps his greatest film. When one thinks of what was being made Hollywood in 1968, one is amazed by the foresight and vision of Kubrick, truly one of the great directors.
Posted by Intelliblog at 00:19