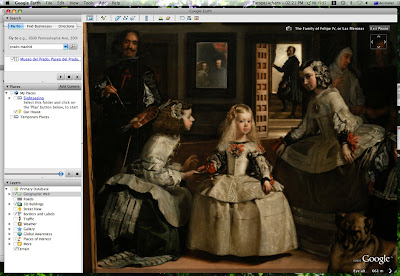 “Fine art is that in which the hand, the head, and the heart of man go together.” - John Ruskin

It’s been a stressful day today with some sickness in the family and a trip to the hospital. All has ended well, however, and it’s now back to normal. Never rains, it pours, they say…

For Art Sunday, I decided to take a virtual trip to one of the great museums in the world, the Prado in Madrid. I have fond memories of visiting this museum when I was in Madrid and it's fantastic to now have the ability through technology to revisit it and focus in on some of the exhibited masterpieces in this museum.

The way to do it is to use “Google Earth”, which can be downloaded for free at http://earth.google.com/ . Once you have downloaded it, type “Prado, Madrid” in the search box and you will be flown to the museum where you will enjoy ultra-high resolution images of some of the most famous paintings in the world.

The screen shot above is from my virtual trip and you can see a detail of the marvellous “Las Meniñas” of Diego Velázquez, painted in 1656. The work's complex and enigmatic composition raises questions about reality and illusion, and creates an uncertain relationship between the viewer and the figures depicted. Because of these complexities, “Las Meniñas” has been one of the most widely analysed works in Western painting.

Las Meniñas shows a large room in the Madrid palace of King Philip IV of Spain, and presents a snapshot of several figures from the Spanish court of the time. Some figures look out of the canvas towards the viewer, while others interact among themselves. The young Infant Margarita is surrounded by her entourage of maids of honour (= Las meniñas), chaperone, bodyguard, two dwarfs and a dog. Just behind them, Velázquez portrays himself working at a large canvas. Velázquez looks outwards, beyond the pictorial space to where a viewer of the painting would stand. A mirror hangs in the background and reflects the upper bodies of the king and queen. The royal couple appear to be placed outside the picture space in a position similar to that of the viewer, although some scholars have speculated that their image is a reflection from the painting Velázquez is shown working on.

The painting has been described as “Velázquez's supreme achievement, a highly self-conscious, calculated demonstration of what painting could achieve, and perhaps the most searching comment ever made on the possibilities of the easel painting”.
Go visit the Prado, this weekend!
Posted by Intelliblog at 01:52