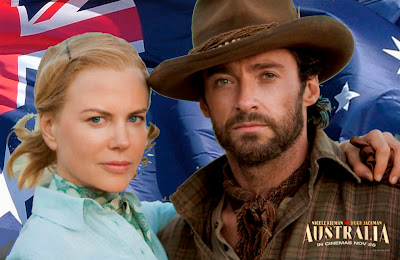 “Nationalism is both a vital medicine and a dangerous drug” - Geoffrey Blainey
Happy Australia Day, Australia! Happy Republic Day, India!
January 26th marks these national anniversaries and in both countries there are national holidays and general rejoicing as both countries celebrate their national identities.

Australia is a continent-country, in area the sixth largest country in the world, about 7.6 million square km in area. It gained its independence from UK in 1901 and its present population of 21,572,816 people has accrued through colonisation and large immigration programmes. The capital city is Canberra, but this is an artificial city, a created small administrative centre. The largest urban centres are Sydney, Melbourne, Brisbane, Perth, Adelaide and Darwin. The North is subtropical and the South-eastern coast has temperate, almost Mediterranean climate. The majority of the continent is arid desert and scrub, making Australia one of the driest, if not the driest place on earth. Vast mineral, oil, coal and natural gas resources exist and the fertile plains around the coast make this a bountiful land. Immense open spaces make Australia one of the least density populated nations with only 2 people per square km. A country of largely underdeveloped rich resources, great natural beauty and relative isolation ensure Australia’s growing importance as a local and world power in the future.

In tribute to our national day today, here is my Movie Monday review of Baz Luhrmann’s, 2008 film “Australia”. The movie is of epic proportions (almost three hours long) and with sweeping themes as big as the Australian landscape. It is set in northern Australia at the beginning of World War II, where an English aristocrat (Nicole Kidman) inherits an enormous cattle station. Amid suspicions of foul play, and rampant English cattle barons who plot to take her land, she joins forces with a rough and ready stock-man (Hugh Jackman) to drive 2,000 head of cattle across hundreds of miles of the country's most rough and cruel land. They arrive in Darwin to witness its bombing by the Japanese forces that had attacked Pearl Harbor only months earlier.

The film is difficult to categorise, hence my characterisation of “epic” before. There is romance, adventure, mystery, war, period piece and I guess some would say even “Western”. It is a hodge-podge, true, but the majesty of the locations and the scene-stealing outback raise it to the level of an epic. There is humour in it and pathos, but one may recognize touches of “Gone with Wind”, “Out of Africa”, “Rabbitproof Fence”, Wizard of Oz”… But to be truly original is getting harder and harder nowadays. Luhrmann was given a big budget and he pulled out all stops. Good old-fashioned melodrama is what he achieved, replete with the clichés, the corny dialogue and the rather stilted acting at times.

Yet the film is engaging and if one goes into it not determined to can it, one can enjoy it. It has flaws (including historical clangers – the Japanese never managed to land on Australian soil in WWII, as the film suggests), but also one may enjoy its multiple virtues. Young Brandon Walters as the endearing young aboriginal boy Nullah will impress most viewers and the appearance of some well-known Australian actors such as Jack Thompson and Bryan Brown will entertain and amuse.

The film is quite controversial and has polarized viewers and critics. Some scream “garbage”, while others heap praise on it. As for myself, I can say it’s no masterpiece, but it was entertaining and undemanding. Escapist and not overly involving of one’s higher mentative faculties. There has been too much hype about it, which I don’t think has helped the movie. See it, make up your own mind.
Posted by Intelliblog at 01:18