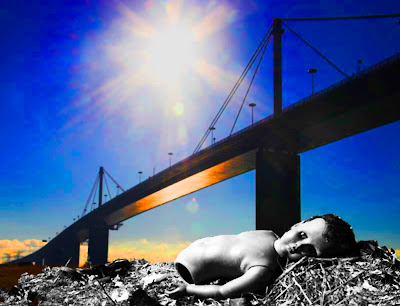 “What broke in a man when he could bring himself to kill another?” - Alan Paton

Horrific news from all over the world continues to filter through and contributes to the rest of the terrible stories that we have become used to. The tragic story of a family being wiped out by a homicide and suicide a couple of days put a human face to the vicissitudes of the economic woes. Ervin Lupoe in LA was deep in debt when he killed his wife, five children, and himself. Lupoe was at least a month behind on his mortgage, owed thousands of dollars on credit cards, and owed the IRS at least $15,000. The couple were fired recently from their medical technology jobs at the Kaiser Permanente hospital in West LA. They allegedly lied about their income to try to qualify for cheaper childcare.

The couple pulled their kids out of school last week and planned to move in with a relative in Kansas. Detectives found the Lupoe’s SUV packed with children’s clothing and snow chains. It’s not clear why that trip didn’t happen, and instead the Lupoe family chose to solve their problems in such a deplorable way. It is a terrible indictment on a society and a system that spends billions to “help” banks our of their financial woes and fails people like the Lupoes.

As I was coming home on the crowded train in this evening’s 44˚C heat, I read in the evening paper about an appalling crime committed today in Melbourne. A little girl, four-year-old Darcey Iris Freeman was thrown 58 metres down from the West Gate bridge in front of her two young brothers this morning just after 9:00 am. She managed to survive the fall into the Yarra River, but died of terrible injuries in the Royal Children’s Hospital several hours later. The culprit was her father, 35-year-old Arthur Freeman. The man was arrested outside the law courts in the City, apparently suicidal and leading his young sons by the hand. He has been arrested and will appear before the magistrate in May. The man is thought to have been involved in a protracted custody dispute with his wife. He was suffering from acute psychiatric distress and had to be treated.

What causes a family man, a father to go over the edge like this and murder his own child? What events could have pushed him to commit such a heinous act? I am trying desperately to understand and find ways to be compassionate, but I am afraid that it’s beyond me. Whatever dispute I had with my wife, whatever dire circumstances besieged me, whatever personal tragedies, disappointments and disasters, would I ever be driven to that terrible act? I cannot fathom any circumstances that would force me to say I would. The man was psychiatrically unstable, maybe that explains it… But still, one’s one child?

There’s a name in criminology circles for the apparent murder-suicide that claimed the lives of seven members of the Lupoe family in Wilmington in LA. Men like Lupoe in this case commit “despondent familicide”. We all know that “homicide” means killing another human being; “suicide” killing oneself; “fratricide” killing one’s sibling; “filicide” killing one’s children, “uxoricide, killing one’s wife, but now we are adding this new word to our vocabulary of despair: “Familicide”…

In the USA, a 2-year-old was burned to death by her father in Arizona after he tired of her requests to see her mother. A mother suffering from post-partum depression in Texas drowns her five children in the bathtub, while not long afterward, another mother in Connecticut beats and stabs her 15-month-old to death. And then, Randy Palm hangs his 5-year-old son Skylar, and then himself in the basement of his Hopewell home. In most of these cases, warped altruism is the most common cause, revenge the least common, as studies by experts cite.

The suicidal mother or father who thinks that she or he cannot abandon a child, or who kills to alleviate the child's suffering, either real or imagined is the one guilty of “despondent filicide”. If the spouse is killed also and the perpetrator commits suicide, the crime is one of “familicide”. In studies of familicide, there is often a history of domestic violence, but few warnings of any impending explosion, since the abuser may very often be despondent or withdrawn as opposed to threatening or overbearing.

We are becoming demented as a society. We have lost our equilibrium, we have misplaced our values, we have lost our shame and we are selfishly pursuing paths of least resistance, yearn for instant gratification, demand personal gain, have abandoned the common good for egotistical agendas. We see more of these offences, more dishonesty, more senseless crimes, more violence on all levels. The state of our economy is the end result of greed and the sacrifice of the general good of the community for obscene personal gain. Is this civilisation? Can such a sick society survive? Is it surprising that “familicide” is becoming more common?

-cide
combining form
1 denoting a person or substance that kills: Insecticide | regicide.
2 denoting an act of killing: Homicide | suicide.
ORIGIN via French; sense 1 from Latin -cida; sense 2 from Latin -cidium, both from caedere ‘kill.’
Posted by Intelliblog at 00:54