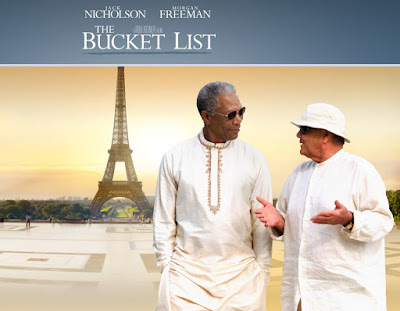 “The fear of death follows from the fear of life. A man who lives fully is prepared to die at any time.” - Mark Twain

If you had a choice, would you like to know exactly when you were going to die? Just think, you could schedule it in your diary: “6:15 pm Wednesday evening, October 6th 2010 – Dying”. You could plan ahead, ensure that everything was in order, and prepare yourself for the appointment with the Grim Reaper. Does this appeal to you? Many people have cogitated over this and the majority concur that no, this is not something human beings take a shine to. Most people (96% of them) prefer NOT to know when they will die…

This topic came up in a film we watched last weekend. It was an excellent movie with two very good actors in it, – Jack Nicholson and Morgan Freeman – but also well directed and with a good plot. The movie is Rob Reiner’s 2007 “The Bucket List” . The plot revolves around a car mechanic, Carter Chambers (Morgan Freeman), who is a man with a good life education and culture and the embittered billionaire, Edward Cole (Jack Nicholson) who owns many hospitals. Carter has been married for 45 years to Virginia and has a happy family, Edward has many divorces on his record and one daughter with whom he has not spoken for years. What is common to both of these men is that they each have a terminal illness and they meet in one of Edward’s hospitals, where (according to general policy), they have to share a room. As they get to know one another, they develop a friendship and when Edward finds a discarded list (the “ Kicking the Bucket List” of title) written by Carter where he has started to write all the things he would like to do before he dies, Edward decides to make the list a reality. Edward includes his own items and invites Carter on a journey of friendship, personal growth and redemption.

The film is strangely uplifting, given its topic, but also very moving and although it could descend into bathos and moralising, it doesn’t. There are some great one-liners in it, delivered with appropriate aplomb by both of the leads, some very sad moments, some laugh out aloud moments, but one is apt to wipe a tear from one’s eye at the end. A fun film, a serious film, a road film, a coming of age film – all the more interesting as both characters who come of age are well past middle age…

Now, going back to my question, “would you like to know when you are going to die?” My answer is that I would rather be in the 4% of the population. Death is part of life. We all die and as much as we may want to postpone death, it remains an inescapable inevitability. We live our life better if we resign ourselves to the fact that we are mortal and that we could die at any moment. If we prepare ourselves for death, then the when doesn’t matter one whit. As Marcel Proust says:

“ We say that the hour of death cannot be forecast, but when we say this we imagine that hour as placed in an obscure and distant future. It never occurs to us that it has any connection with the day already begun or that death could arrive this same afternoon, this afternoon which is so certain and which has every hour filled in advance.”

We live a better life if we prepare for our death as if it were to arrive this very day, this afternoon. To try and preserve our life as long as possible is certainly commendable, but the quality of life is as important as its quantity. And always of course we should aim to die as young as possible, although we may want to survive for as many years as possible…
What about you? What do you think about death? If it were possible would you like to know the time you were to die?
Posted by Intelliblog at 22:00