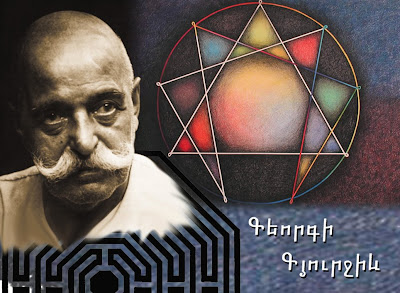 “A ‘sin’ is something which is not necessary.” George Gurdjieff

It is the anniversary of the birth of George Ivanovitch Gurdjieff today. Gurdjieff was an Armenian-Greek, born this day in Alexandropolis, Armenia, in 1877 (although some claim it was in 1866). His father, a Pontian Greek, had inherited a rich ancient culture mainly through the oral tradition and it was thanks to him that Gurdjieff’s childhood was filled with stories and poems of the distant past. He grew up in the southern Caucasus where many different races, nationalities, traditions, religions and customs meet. Although he was brought up in the Eastern Catholic faith, Gurdjieff was interested throughout his life in many other faiths and cultures. As he grew up, he became convinced through his contacts that true knowledge of man and nature had existed in the past, but modern man had lost it. He made it the object of his life to rediscover these ancient mysteries and it was this conviction that shaped his whole life.

He formed the group “Seekers of the Truth” comprising archaeologists, doctors, linguists, artists, musicians, etc and he was thus able to connect with many strata of the communities in the Middle East and Central Asia where he travelled in order to discover a rich storehouse of traditions and obscure knowledge. He disappeared for 20 years and practiced an existence devoted to self-examination, a honing of his personal philosophy and a refinement and distillation of the numerous ideas he was exposed to. In 1912, he went to Russia, living in Moscow and St Petersburg, dedicating his life to transmitting his knowledge and philosophy.

In 1922 he moved to France and settled near Fontainebleau, beginning in 1924 to write many of his famous works: “Meetings with Remarkable Men”, “Beelzebub’s Tales to his Grandson” and “Life is real Only When ‘I Am’”. Gurdjieff claimed that people do not perceive reality, as they are not conscious of themselves, but live in a state of hypnotic “waking sleep.” He said: “Man lives his life in sleep, and in sleep he dies.” Gurdjieff taught that each person perceived things from a completely subjective perspective and essentially, each one of us manufactures his own reality. Gurdjieff stated that maleficent events such as wars and so on could not possibly take place if people were more awake. He asserted that people in their typical state were unconscious automatons, but that it was possible for a man to wake up and experience life more fully.

Something which has become associated with Gurdjieff is the enneagram and the system of personality analysis it has engendered. Although Gurdjieff never explained the significance of the enneagram in detail in this context, he did allude to it as a means of self exploration, Gurdjieff maintains that the enneagram figure is a symbol that represents the “law of seven” and the “law of three” (the two fundamental universal laws) and, therefore, the figure can be used to describe any natural whole phenomenon, cosmos, process in life or any other piece of knowledge. It is a nine-sided figure inscribed in a circle and vertices can be associated with musical notes and can be used allegorically to represent passages from one state to another.

Gurdjieff shared his ideas in a multitude of ways, including meetings and lectures, music, sacred dance, writings, and group work. He was not consistent in his use of these methods through his lifetime, with his six years in Paris being devoted primarily to writing, while composition of music and movement centered around a few distinct periods. In Russia he was described as keeping his teaching confined to a small circle of “disciples”, while in Paris and North America he gave numerous public lectures and demonstrations. Gurdjieff’s music has great inner simplicity, purity and clarity. It is beautiful and has an indefinable, special character that seems to touch our soul. It is definitely music that one may listen to and explore one’s inner world with introspectiveness and reflection. Gurdjieff collaborated in writing some of his music with Ukrainian composer Thomas de Hartmann, one of his pupils.

Gurdjieff died in Paris on the 29th of October, 1949. Since his death, his ideas have spread widely and have found a resonance with many people all over the world, particularly the USA. As a mystic and a philosopher Gurdjieff with his life’s work has the ability even nowadays to galvanise people into increasing and focussing their attention and energy in various ways, and to minimise daydreaming and absentmindedness. According to his teaching, this inner development of oneself is the beginning of a possible further process of change, whose aim is to transform a man into what Gurdjieff believed he ought to be and has the capability of being.
Posted by Intelliblog at 00:48