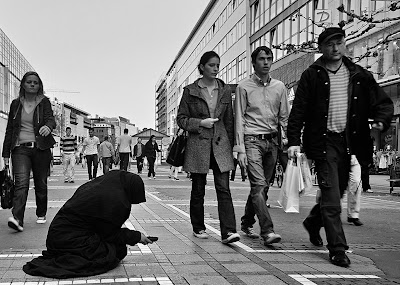 “Wherever a man turns he can find someone who needs him.” - Albert Schweitzer

Each day I commute to work on the train. In the City around the railway station one sees all sorts of people: Many of the regular fellow-commuters, the newspaper sellers, the waiters and café owners who are up early opening their businesses, some early morning tourists walking around with map in hand, delivery men parking their trucks and unloading their consignments, workmen fixing some faults on the road and of course all of the morning hustle and bustle of a city waking up to a new day and preparing for a day’s work. Today there was someone unusual, someone I hadn’t seen before. A woman sitting on the steps of the train station begging. We don’t have many beggars in Melbourne, so it is rather a strange thing to see one in the City. There are many buskers, but beggars, no.

Is it a sign of the times? A sign of the worsening economic crisis and the difficult months ahead? Is it a sign of the increasing problems we have with gambling? Is it a sign of the increasing numbers of street people we have to deal with? I looked at the woman and there was at first a negative reaction towards her, which I am glad to say was only momentary and passed as quickly as it had made its presence felt. I looked at her and in a few seconds I had taken stock of her clothes, her physical condition, her bearing, and decided that this human being was to be pitied and one should feel compassion towards her rather than aversion and distaste. A few coins that one can part with and not think further about may make a big difference to her survival.

What forces people to beg, to lose their dignity and rely on the kindness of strangers in order to survive? How many tragic stories of human frailty and how many examples of human failings are hidden in each of these people living in the streets? Vices may cause the offenders to end up in gaol, foibles are generally regarded as mere eccentricities, but serious faults that fail to be corrected, human errors that go unchecked, repeated failures that may cause someone to become so demoralised and hopeless as to end up in the street begging are to be regretted and one cannot help but feel sadness and be moved to compassion for a person’s reduction to this state…

She sits alone, forgotten on the steps
Her head bowed low as she recollects:
She too lived once, so long ago,
Amidst bright lights all aglow…

She sits, now grey-haired, past her prime
Her clothes all torn, her shoes in grime;
Once she was garbed in furs and satin
A queen, the toast of all Manhattan.

Her mind is numb as she tries stopping thought,
She knows regret and bitterness will lead to nought.
Her cold and bony body now demurs
To admit that fame and glory once were hers.

A coin clinks in the can, thrown at her feet
Her huddled form forlorn, black in the icy street.
Once, suitors kissed her jewelled shoes,
She found it so amusing all to refuse.

Now gloom and darkness, hopelessness, despair
Even her lips deny to chant a simple prayer.
When all is lost, how harsh the world
Into the dark abyss of Lethe she is hurled.

She sits alone, forgotten on the steps
In nothing does she hope, none she expects.
She too lived once, so long ago,
Where once was sun, now only snow;
Death comes and she wishes him to be quick
The candle sputters, dies, it’s burnt its wick…
Posted by Intelliblog at 00:55