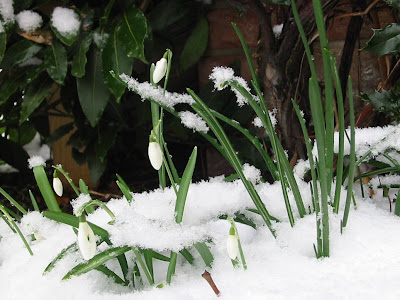 “Life is a shipwreck but we must not forget to sing in the lifeboats.” - Voltaire

Love can be such difficult emotion to describe, especially when one considers its myriad of forms and the varieties of the contexts it can be expressed in. Even the love between people who share a life together, can have many shades and tints, the hue of which is determined b the relationship they share. We all love our parents, our children, the rest of our family, our dog, our cat, our friends. The love we all yearn for, however, is that between two partners in a relationship that transforms two former strangers into a couple who share all and whose two separate fleshes become one…

I’ll be reborn,
Like a drooping snowdrop flower
Peeking from a cover of snow;
Like a pure white lamb in Spring;
Like an emerald blade of grass,
From dark, dank soil emergent.

I’ll be resurrected,
Like the swollen seed sprouting;
Like a gentle wave on quiet shore
When it’s stirred by the zephyr;
Like the first star, bright,
On velvet twilit sky of evening.

I’ll become free,
Like prisoner released from an unjust confinement;
Like mist of the valley
When it’s caressed by rising sun;
Like the bird that soars so high
When first released from its cage.

I’ll be redeemed,
Like a promise finally fulfilled;
Like a sin confessed and forgiven;
Like the pure metal released from ore
Under the purifying flame of fire;
Like a dusty road washed clean by a rain shower.

I’ll be comforted,
Like a traveller who at last
Sees his welcoming home shore;
Like a desert wanderer, who sick of mirages
Finally arrives at the real oasis,
Like an orphan who can feel a mother’s love.

I’ll be reborn,
I’ll be resurrected,
I’ll become free,
I’ll be redeemed,
I’ll be comforted,
I’ll live my wasted life over,
When you come into it…
Posted by Intelliblog at 22:15