THE WORST WEEK OF MY LIFE! 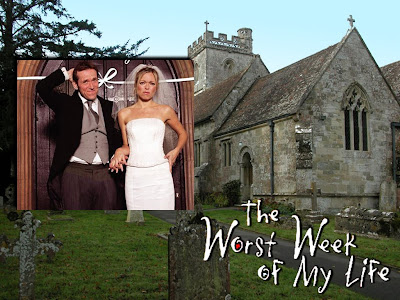 “The most wasted of all days is one without laughter.” - e.e. cummings

At the weekend we watched a British comedy series on DVD. We certainly needed a little bit of a laugh and this was just the right thing to do it. I had not seen this when it was broadcast on TV, and as it was on special at our video store I bought it simply because I liked the blurb on the back. It is “The Worst Week of My Life” (2004), a well written and acted British farce that delivers the type of light-hearted humour that one expects from the country that knows how to laugh at itself.

The premise of the series is very simple: It is only a week before the wedding of Mel (Sarah Alexander) and Howard (Ben Miller) and there are hundred and one things to take care of. Well, of course everything that can go wrong does and Howard gets himself into progressively hotter and hotter water. It is nothing new, you may think, it’s been done before (remember “Meet the Parents” of 2000?). However, it is strangely novel and refreshing and there is a laugh a minute guaranteed, even more of you see it as the bit of fluff that it is.

The comedy here, sure enough, sometimes is quite predictable (and that is when one cringes for poor Howard…), but at other times the jokes come in from left field and one cannot help but dissolve into full belly laughs. The other benefit is that there is no canned laughter in the soundtrack (I really dislike that!) and one can spontaneously and naturally laugh when one feels like it, instead of being compelled to by the cue card.

The bride-to-be’s upper class parents can’t stand the sight of poor Howard and much of the humour is derived from his devious ways of trying to ingratiate himself into their good favours. However, in the course of just one week he crawls into bed and gropes his future mother-in-law, accidentally throws the family dog into a cement mixer while it’s on, destroys a valuable painting and injures (nearly fatally) the beloved grandmother. And while he thought he had almost won them over, his own father turns up, sexually involved with a lap dancer with as much class as a public toilet.

Well, it’s not Ibsen nor is it Molière, but it’s not pretending to be anything else except an amusing television sitcom. I believe a sequel or two has been made (post nuptials). We needed to laugh last weekend and this was just the thing. Maybe we wouldn’t have found it as funny under other circumstances, but seeing there was quite a bit of emotional charging during the past week, this was wonderful. Have a look at it if you lay your hands on it, you will be quite amused!
Posted by Intelliblog at 22:11