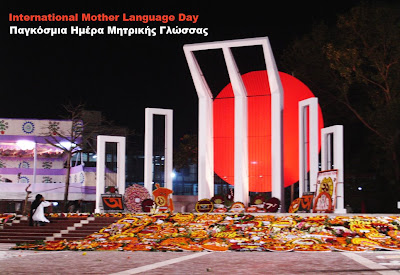 The United Nations (UN) International Mother Language Day celebrates language variety and diversity worldwide annually on this day, February 21st. The day was chosen as it commemorates the killing of four students on February 21st, 1952 in Bangladesh, because they campaigned to officially use their mother language, Bengali, in Bangladesh. It is a public holiday in Bangladesh, where it is also known as Shohid Dibôsh, or Shahid Day. People lay flowers at Shahid Minar (The Martyr’s Monument), they purchase glass bangles for themselves or female relatives; eat a festive meal and organise parties. Also it is on this day that prizes are awarded or literary competitions are hosted. It is a time to celebrate Bangladesh’s culture and the Bengali language.

At the partition of India in 1947, the Bengal province was divided according to the predominant religions of the inhabitants. The western part became part of India and the eastern part became a province of Pakistan known as East Bengal and later East Pakistan. However, there was economic, cultural and lingual friction between East and West Pakistan. These tensions became critical in 1948 when Pakistan’s government declared that Urdu was the sole national language of both West and East Pakistan. This sparked protests amongst the Bengali-speaking majority in East Pakistan. The government outlawed the protests but on February 21, 1952, students at the University of Dhaka and other activists organised a protest. Later that day, the police opened fire at the demonstrators and killed four students. These students’ deaths in fighting for the right to use their mother language are now remembered on International Mother Language Day.

The unrest continued as Bengali speakers campaigned for the right to use their mother language. Bengali became an official language in Pakistan on February 29, 1956. Following the Bangladesh Liberation War in 1971, Bangladesh became an independent country with Bengali as its official language. The Shahid Minar (Martyrs’ Monument) in Dhaka, Bangladesh, pays homage to the four demonstrators killed in 1952. The monument was built three times. The first time it was built on February 22nd-23rd in 1952 but the police and army destroyed it within a few days. Construction the second time started in November 1957, but the introduction of martial law stopped construction work and it was destroyed during the Bangladesh Liberation War in 1971. The third version of the Shahid Minar was built to similar plans as the second version. It consists of four standing marble frames and a larger double marble frame with a slanted top portion. The frames are constructed from marble and stand on a stage, which is raised about four meters above the ground. The four frames represent the four men who died on February 21, 1952, and the double frame represents their mothers and country. Replicas of the Shahid Minar have been constructed worldwide where people from Bangladesh have settled, particularly in London and Oldham in the United Kingdom.

An International Mother Language Day monument was erected at Ashfield Park in Sydney, Australia, on February 19th, 2006. It consists of a slab of slate mounted vertically on a raised platform. There are stylized images of the Shahid Minar and the globe on the face of the stone. There are also the words "we will remember the martyrs of 21st February" in English and Bengali and words in five alphabets to represent mother languages on five continents where people live.