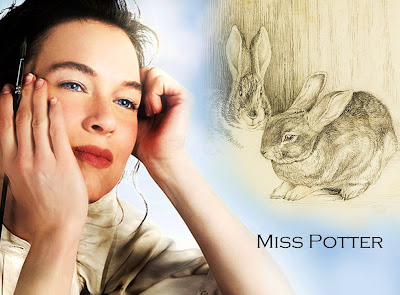 “We could never have loved the earth so well if we had had no childhood in it.” - George Eliot

Yesterday we watched a delightful film that we enjoyed and recommend. It was Chris Noonan’s 2006 “Miss Potter”, with Renée Zellweger, Ewn Mcgregor and Emily Watson. It is a biographical film of the children’s book author, Beatrix Potter, of “Peter Rabbit” fame. Miss Beatrix Potter (1866-1942) was born into an upper middle class, family with aristocratic pretensions. Beatrix becomes a 32-year-old unmarried “Miss” who still lives with her parents, under her mother’s watchful eye. She refuses offers of marriage, preferring to write and illustrate children’s books, an occupation that is looked down upon by her mother.

The film is a story of a repressed woman’s liberation and journey to true independence so that she could follow her dreams. We become part of Beatrix’s journey through the publication of her books and the relationship that develops between her and her publisher, Norman Warne (another young person living at home and having to prove himself as capable in the family’s business – the Warne Publishing House). Norman’s sister, Millie, is another solitary female that helps Beatrix discover her wings, and who supports her throughout her first steps of independent life.

The film is very well made, the acting, direction, costumes, sets, music and cinematography excellent. I would have to be churlish to find fault with something, however, the animation used (albeit sparingly) to bring some of Beatrix’s drawings “to life” I wasn’t particularly impressed with. Her drawings are so eloquent, that the animations are unnecessary. Nevertheless, the gimmick is not too intrusive and it is easy to overlook it.

The genuineness of the settings and the authenticity of the costumes and sets is quite amazing and contributes to the engaging nature of the film. Add to that the stunning Lake Country, Cumbria, and Isle of Man scenery with touches of period mores (Miss Potter’s elderly chaperone accompanies her everywhere!) and the film is a winner. Besides which there is not a single scene of violence, sex or gratuitous slapstick in it – quite a rare thing in movies nowadays. The film makes a strong point about the environment and conservation, but it manages to do so almost subliminally. It is certainly no militant homily and Miss Potter demonstrates her views on the matter by actions, not words. If only all of the proselytisers were as gently persuasive as she was!

I recommend this movie to everyone who still has a child in their heart, to those who love a well made period movie, to those who wish to enjoy a movie where peace and delight are what matter and where the gratuitous violence, sex, expletives and special effects of most movies nowadays do not make one appearance and where they are missed at all.
Posted by Intelliblog at 22:01