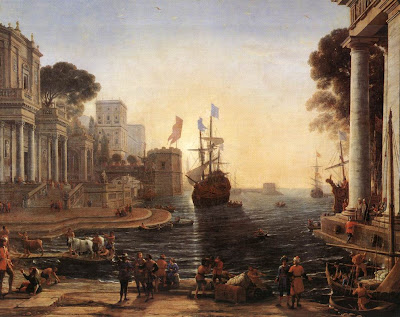 “To send light into the darkness of men's hearts - such is the duty of the artist.” – Robert Schumann

For Art Sunday today, an iconic French Baroque painter, Claude Gellée (1604-1682) who was better known as Lorrain after his place of birth in France. He was a very influential and successful artist in the seventeenth century, who became famous as a landscape painter in Italy. His paintings were picturesque but also full of the rough textures of wild nature with romantic old castles or classical ruins. The paintings, drawings and prints by Claude Lorrain were very popular and widely collected. His style set the standards for what was worthy of appreciation.

Claude created landscapes that were expansive, dramatic and always eye-catching. In full color paintings or sepia toned washes, Claude used the scale of values to express near to far. Claude often gave the foreground strong contrasts of light and shadow while the middle distance had less contrast. The far background was rendered even lighter and with less contrast between shadow and highlight to give a sense of great distance.

While the subjects of his paintings and drawings were often from the Bible or classical mythology, the mood and atmosphere of the landscape was the real subject. His figures were were usually only a minor part of a scene to help set the scale and perspective. The dramatic lighting of his painting often relied on sunrise or sunset and the golden glow of his canvases seems to have inspired Turner.

Here is an archetypal Lorrain canvas of 1648: “Ulysses returns Chryseis to her father”.
Posted by Intelliblog at 01:18