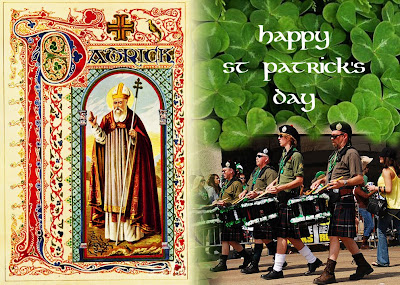 Saint Patrick’s Day is a predominantly Irish holiday honouring the missionary credited with converting the Irish to Christianity in the 5th century AD. He was born around 387 AD in either Scotland (near the town of Dumbarton) or in Roman Britain (the Romans left Britain in 410 AD). His real name is believed to be Maewyn Succat. He was kidnapped at the age of 16 by pirates and sold into slavery in Ireland. During his 6-year captivity, while he worked as a shepherd, he began to have religious visions, and found strength in his faith. He finally escaped, going to France, where he became a priest, taking on the name of Patrick. When he was about 60 years old, St. Patrick travelled to Ireland to spread the Christian word. Reputedly, Patrick had a winning personality, which helped him to convert the fun-loving Irish to Christianity. He used the shamrock, which resembles a three-leafed clover, as a metaphor to explain the concept of the Holy Trinity. He died at 461 AD.

St Patrick is also credited with ridding Ireland of snakes (there are no native snakes on the island). When Norse invaders came to Ireland in the 9th century they noticed that the island also had no toads. The Norse word for toad is “paud”. When they heard the saint referred to as Patrick, they interpreted it as “Paudrig”, meaning “Toad-Expeller” in Norse. Toads became snakes, no doubt aided and abetted by the Old Testament symbolism of the snake as a reification of evil. Furthermore, the snake was revered pagan totem and the victory was two-fold. Thus a legend was born.

St Patrick’s day is celebrated in Ireland and in all parts of the world where the Irish have made their home. The St Patrick’s Day parade is a tradition that perhaps started in Ireland where during the holy day, the pubs were closed to locals but could serve travellers. Many inveterate drinkers got around this by walking in groups to the next town and as “travellers” could be served in the pub. In the USA the first St Patrick’s Day parade was held in Boston in 1737 and then the event caught on in New York in 1762 when Irish military units were recruited to serve in the American colonies.

In Ireland the traditional parade did not start to be widespread until the 19th century, introduced from the USA, but its nature was rather more religious and family oriented. The Parade outside Ireland can often degenerate into a carnival-like celebration, lubricated by gallons of green beer and backed by local businesses that see it as a means of advertising their wares.