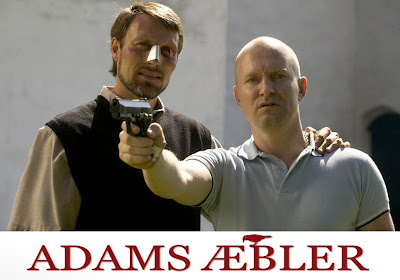 “Victory attained by violence is tantamount to a defeat, for it is momentary.” - Gandhi

We watched a very good Danish film at the weekend, a comedy as black as they get and quite confronting. It was the 2005 “Adam’s Apples” by director Anders Thomas Jensen who also wrote the script. The film manages to be amusing and engaging as a comedy, but at the same succeeds in communicating a meaningful message to the audience, while being quite complex in its depth and moral questions it raises. In fact, the film’s central theme is the concept of good and evil and the way that different people view this concept and how they live their lives in the shadow of the choices they make.

The film revolves around Ivan, a priest living in an isolated region of Denmark and having under his charge various prisoners who have been released in order to serve some of their sentence in community service. There is an ex-tennis player turned sex offender and now obese and kleptomaniac; there is the alcoholic woman who is pregnant and wonders whether her drinking during the pregnancy has caused her baby to be congenitally disabled; the Saudi-Arabian robber with a penchant for shooting; and finally Adam, the latest arrival, who is neo-Nazi skinhead with a mean streak of violence who admits to being evil.

Adam is in complete contrast with Ivan, the priest, who believes that all is a temptation, that the devil is lurking behind all adversity and that the only weapon against this is infinite forbearance, faith and the goodness of God. Ivan is portrayed in a rather negative way by Jensen. For a priest, there seems to be little of love for his neighbour but rather a business-like attitude of helping others because his faith demands it. Adam observes Ivan and discovers his Achilles heel an takes great pleasure in destroying Ivan. However, as the story unfolds, it is Adam who unwittingly starts to care about his fellow-inmates and it is the evil, cruel Adam who is moved to acts of brotherly love.

The film relies heavily on biblical allegories (the obvious one is the apples of the garden of Eden and the attempts by Adam to consume them). The other is the Book of Job and Christian patience and faith, belief in God even in the face of adversity. The film moves easily from almost farcical, high comedy to darkest philosophy and deals with issues such as disability, abortion, gangland violence, gun culture, selfishness and altruism, faith and atheism. It is movie that provokes and goads, massages and tickles, shocks and entertains.

The cast does a marvellous job with Ulrich Thomsen giving an excellent performance as Adam as does Mads Mikkelsen as Ivan. Nicolas Bro, Ali Kazim and Paprika Steen are also perfect for their roles. Ole Thestrup is the broadly comical Dr. Kolberg, who plays the caricature of the insensitive doctor, who lacks empathy or other proper human feelings. The music is somber and suits the dark mood well, but does not detract from the comedic elements of the story.

It is definitely worthwhile seeking this film out and seeing it. However, be warned, there are some very violent scenes in it, which nevertheless do not seem to be out of place. It is almost in the vein of comic book or animated film violence, although blood and gore are graphically portrayed. I gave the film an 8 out of 10.
Posted by Intelliblog at 02:48