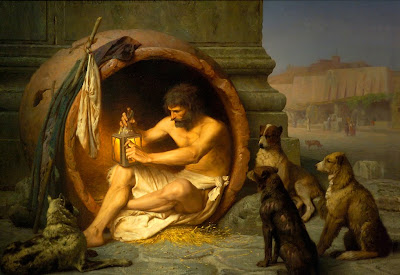 “True contentment depends not upon what we have; a tub was large enough for Diogenes, but a world was too little for Alexander.” - Charles Caleb Colton

For your delectation on this Art Sunday, a painting by Jean-Léon Gérôme (May 11, 1824 - January 10, 1904). Gérôme was a French painter and sculptor in the style now known as Academicism. The range of his oeuvre included historical painting, Greek mythology, Orientalism, portraits and other subjects, bringing the Academic painting tradition to an artistic climax.

Born at Vesoul (Haute-Saône), he went to Paris in 1840 where he studied under Paul Delaroche, whom he accompanied to Italy (1843-1844). He visited Florence, Rome, the Vatican and Pompeii, but he was more attracted to the world of nature. Taken by a fever, he was forced to return to Paris in 1844. On his return he followed, like many other students of Delaroche, into the atelier of Charles Gleyre and studied there for a brief time. He then attended the École des Beaux-Arts. In 1846 he tried to enter the prestigious Prix de Rome, but failed in the final stage because his figure drawing was inadequate.

A little before he died he wrote to Aublet, one of his students: “I begin to have enough of life. I've seen too much misery and misfortune in the lives of others. I still see it every day, and I'm getting eager to escape this theatre.” He was to live just ten more days and perhaps knew that his heart was weakening.

This painting of his is “Diogenes” (1860), the famous ancient Greek philosopher, foremost of the school of cynics (kyon/kynos – “dog” in Greek). Cynicism called for a closer imitation of nature, the repudiation of most human conventions, and complete independence of mind and spirit. Diogenes (ca. 400-ca. 325 BC) was the son of Hicesias, and was born in Sinope. He arrived in Athens after he and his father had been exiled from their native city for debasing the coinage in some way. His life in Athens was one of great poverty, but it was there that he adopted Antisthenes's teachings and became the chief exponent of Cynicism.

Diogenes was not famous for developing a strong theoretical argument for his way of life. Antisthenes, the pupil of Socrates, was his inspiration, and he put into practice his master's teachings in a way which made a striking impression upon his contemporaries. Indeed, it was Diogenes's application of Antisthenes's principles which gained for him the notoriety he enjoyed. His goals were self-sufficiency, a tough and ascetic way of life, and anaideia, or shamelessness. Diogenes held that through a rigorous denial of all but the barest necessities of life one could train the body to be free of the world and its delusions. Through anaideia one could show the rest of humanity the contempt in which their conventions were held. He is shown here to live in poverty in an old pot and be accompanied by the dogs that his philosophy took its name from.

The lamp he is lighting and which he used to hold aloft even in daylight was to aid him to find an “honest human being”. However, he used to say with disappointment that even with the aid of his lamp he found nothing but scoundrels and rascals. When Alexander the Great visited Diogenes, he stood in front of him happy to have met the famous philosopher. He introduced himself and asked him if he desired anything of him, as he was ruler of the world. Diogenes looked at him blandly and asked him to move sideways, as he was blocking the sunlight that warmed him. Alexander then asked him why he was staring at a pile of human bones so intently. Diogenes replied that he was trying to distinguish the bones of his illustrious father from the bones of a slave but could see no difference between the two. Alexander then said to him: “If I were not Alexander, then I should wish to be Diogenes”.
Posted by Intelliblog at 01:45