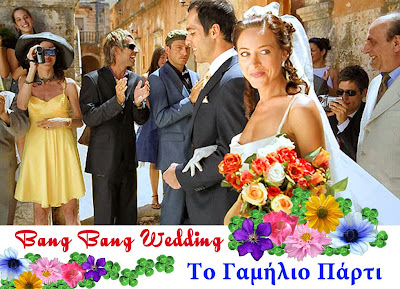 “Marriage (noun): The state or condition of a community consisting of a master, a mistress, and two slaves, making in all, two.” - Ambrose Bierce


We went to the 16th Greek Film Festival here in Melbourne, last week and saw one of the Greek films on show, “Bang Bang Wedding” («Το Γαμήλιο Πάρτι» in Greek, meaning “The Wedding Reception”). This was a 2008 romantic comedy directed by Christine Crokos and starred Alex Dimitriades, Faye Xyla, Betty Maggira, Chrysa Ropa, Wilma Tsakiri and Christos Biros. There was a connection with Australia as the leading man, Alex Dimitriades is an Australian-Greek who has been in several films in Australia already. This was his first Greek film.

The film was pleasant enough, although rather thin on plot and unfortunately, some great opportunities for great comedy went unexploited. It managed to raise chuckles in us, although some members of the audience had come prepared to laugh big time and they did (even at inappropriate points, I’m afraid – but maybe I am being a snob…). We felt throughout that the potential of the cast was underutilised and the fault was mainly with the script, but also the rather pedestrian direction.

The plot revolves around a wedding taking place in Crete. The family is Cretan, but its members live all around the world and the wedding serves as an excuse to bring them all together in order celebrate and do some family bonding. The groom is a fashion photographer and the bride an ecologist –very modern and very emancipated. The parents, in-laws and extended family and friends provide some sub-plots which are rather insubstantial and to pad out the film there is also a private party in a villa that wedding guests crash into. This because the wedding invitations give wrong directions on how to get to the rather isolated country property where the wedding reception will be held. Most of the film revolves around the adventures of the guests and family as they try to get to the reception. The bride and groom argue and decide to get a divorce, each going their separate ways, only to find that they are still madly in love with each other. The bride’s stepmother gets amnesia, the groom’s mother gets drunk, the groom’s father turns up with his new English wife and throws a spanner in the works, while some wedding guests have a good time at the party, which is not the wedding party.

The scenery of Crete formed a gorgeous backdrop for some scenes and the music was interestingly quirky, although not so much Greek as one would have expected. The film was pleasant and amusing, but not one of the great comedies. If you come across it and one-and-a-half hours to spare, watch it. But certainly, don’t go out of your way to find it in order to watch it!
Posted by Intelliblog at 22:42