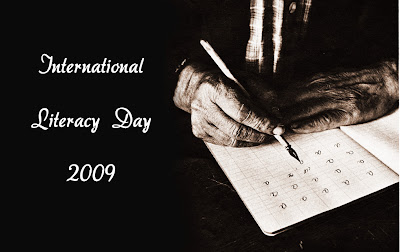 “He who opens a school door, closes a prison.” - Victor Hugo

The photograph above by David Seymour moves me and makes me quietly introspective. The contrast between the gnarled old hands and the childlike letters they labour to write is a confronting sight. We take it for granted that an adult can read and write. We refuse to acknowledge that there is a reason nowadays for anyone to be illiterate. Yet, even today throughout the world, one in five adults is still not literate and two-thirds of them are women while 75 million children are out of school. Illiterate generations still cede their place to illiterate offspring and in developing countries, it still remains an enormous problem.

Have you ever thought what it would be like not being literate? I was immersed in such an experience when I was visiting Egypt about 30 years ago. I was in Aswan and in those days, English speakers were few and far between in Southern Egypt. I could communicate mainly with gestures and with a few elderly people in pidgin French. The most intimidating, humbling and disempowering experience that I had was being surrounded by signs, newspapers, magazines, street names, traffic signs, all written in Arabic – a script and language that I was completely unfamiliar with. It was then that I realised how an illiterate person felt, surrounded by a sea of mysterious symbols that they couldn’t understand…

Literacy is a human right, a tool of personal empowerment and a means for social and human development. The most effective way to disenfranchise and render powerless a group is to deprive them of the right to literacy. Spoken language and oral communication are a characteristically human trait that distinguishes us from animals, however, being able to command the written form of language is the difference between the civilised and the uncivilised, the powerful and the weak, the influential and ineffectual, the advantaged and the disadvantaged, the prominent and the obscure.

Educational opportunities depend on literacy and without literacy even the most basic of educations is impossible. Literacy is essential for eradicating poverty, reducing child mortality, curbing population growth, achieving gender equality and ensuring sustainable development, peace and democracy. A good quality basic education equips students with literacy skills for life and further learning; literate parents are more likely to send their children to school; literate people are better able to access continuing educational opportunities; and literate societies are better geared to meet pressing development.

This year, International Literacy Day put the spotlight on the empowering role of literacy and its importance for participation, citizenship and social development. Literacy and Empowerment is the theme for the 2009-2010 biennium of the United Nations Literacy Decade.

I look at the photograph above and I feel an immense gratitude towards my parents, my teachers, and the luck of the draw that resulted in me being born in an environment where I was assured of being amongst the four of five that were literate, rather than the one in five who isn’t. You are reading this and therefore you should celebrate with me your literacy. Happy Literacy Day 2009!
Posted by Intelliblog at 01:42