A DAY IN ADELAIDE 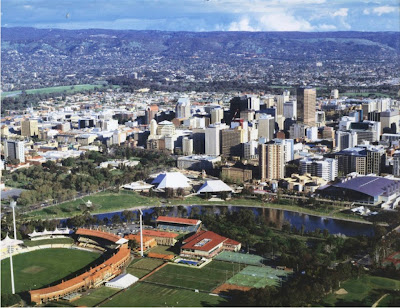 “By working faithfully eight hours a day you may eventually get to be boss and work twelve hours a day.” - Robert Frost

I was in Adelaide for work today and the day was once again hectic and full, but once again satisfying. This morning the flight was delayed at Melbourne airport because there was heavy fog in Sydney. All of the international flights that could not land in Sydney airport were diverted to Brisbane and Melbourne. This wrought havoc with the outbound flights at Melbourne and our plane ended up sitting on the tarmac for 40 minutes. I always try to get a very early flight as those usually don’t have many disruptions, but my luck ran out today. Nevertheless, I was on time for my first early morning appointment in Adelaide, one advantage being that Adelaide is 30 minutes behind Melbourne time.

After my successful first appointment in one of the State Government Departments, I hurried off to the Hyatt Hotel, to go to the formal launch of South Australia’s “State of Ageing” report. This was an initiative of the State Government and the Minister for Ageing, the Hon Jennifer Rankine MP, officially opened the function and gave out the prizes for the best research papers and posters. Representatives of the three Universities in South Australia were there, as well as the winner of the South Australian Senior of a couple of years back who gave a very amusing talk on senescence and its joys.

The initiative and the project are extremely interesting and much needed. It is great to see a State Government in Australia take an active role in planning for the future in terms of dealing with our ageing population and the demands it will place on our social fabric. The report launched today is the first project of the South Australian Ageing Research Round Table, an initiative of the Office for the Ageing that brings together Flinders University, the University of Adelaide and the University of South Australia. The group will monitor the implications of an ageing population and link policy into practice.

I then took one of the staff members of our Adelaide Campus to lunch and discussed with her the various issues she currently faces as the campus is beginning to teach our new degrees in South Australia. That was a very fruitful meeting also and it was good to hear “straight from the horse’s mouth” the challenges the Campus faces. I then went back to the campus and inspected some recent renovations that were made and the new clinic fit outs.

The day finished with another meeting, in another Government Department. This time the topic was growth and educational partnerships. It was refreshing to hear someone in Government coming up with some great ideas and actually being helpful. That was an extremely useful meeting and we both came out of it with sheaves of notes and lots of items to go and work on. The potential for some great work is there and the opportunities many.

Did I mention I took some proof-reading with me to do on the plane? And yes I did that too. Never a dull moment! Now I think it’s time for bed and a good night’s sleep. More to do tomorrow bright and early.