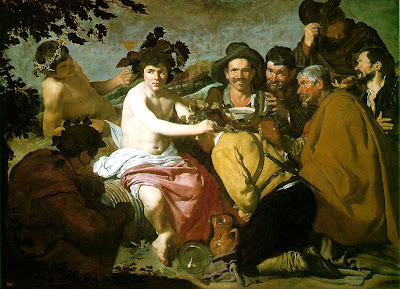 Diego Velázquez (1599-1660) is acknowledged as Spain's greatest painter and as one of the supreme artists of all time. A master of technique, highly individual in style, Diego Velázquez may have had a greater influence on European art than any other painter, and his canvases are always a delight to see. I remember visiting the Prado in Madrid several years ago and staring transfixed at his canvases. They combined superb composition, beautiful colour balance, marvellous technical expertise and above all a magnificent conception and understanding of the whole subject.

Diego Rodriguez de Silva Velázquez was born in Seville, Spain, sometime shortly before his baptism on June 6, 1599. His father was of noble Portuguese descent. In his teens he studied art with Francisco Pacheco, whose daughter he married. The young Velázquez once declared, "I would rather be the first painter of common things than second in higher art." He learned much from studying nature. After his marriage at the age of 19, Velázquez went to Madrid. When he was 24 he painted a portrait of Philip IV, who became his patron.

The artist made two visits to Italy. On his first, in 1629, he copied masterpieces in Venice and Rome. He returned to Italy 20 years later and bought many paintings (by Titian, Tintoretto, and Paolo Veronese) and statuary for the king's collection. Except for these journeys Velázquez lived in Madrid as court painter. His paintings include landscapes, mythological and religious subjects, and scenes from common life, called genre pictures. Most of them, however, are portraits of court notables that rank with the portraits painted by Titian and Anthony Van Dyck.

Duties of Velázquez' royal offices also occupied his time. He was eventually made marshal of the royal household, and as such he was responsible for the royal quarters and for planning ceremonies. In 1660 Velázquez had charge of his last and greatest ceremony, the wedding of the Infanta Maria Theresa to Louis XIV of France. This was a most elaborate affair. Worn out from these labours, Velázquez contracted a fever from which he died on August 6, 1660.

Velázquez was called the "noblest and most commanding man among the artists of his country." He was a master realist, and no painter has surpassed him in the ability to seize essential features and fix them on canvas with a few broad, sure strokes. "His men and women seem to breathe," it has been said; "his horses are full of action and his dogs of life." Because of Velázquez' great skill in merging color, light, space, rhythm of line, and mass in such a way that all have equal value, he was known as "the painter's painter."

The painting above is his “Drunkards” or “The Feast of Bacchus”. Velázquez was inspired by Ovids Metamorphoses to paint this between 1628-1629. He held a point of view toward mythology, common in the 17th century, that saw the activities of pagan divinities as less than divine and the behaviour of humans under their influence as less than Christian. Thus, his Bacchus is a callow, overweight youth with flaccid muscles; the inebriated rustics are buffoons. Velázquez points his moral at the right, where a beggar is refused with false regret by one of the bacchants. The distant gaze of the god of wine is rather a nostalgic look towards the past and a means of distancing himself from the sordidness of the scene around him.

Bacchus was he Roman equivalent of the Greek god Dionysus, a distinctly Greek invention. This was a god of merrymaking and the theatre, entertainment and sexuality. Of green things and fertility, of festivity but also one of divine justice and a protector of innocence and youth. One of the myths recounted of his early life recounts how as a youth he was captured by Tyrrhenian pirates so that he could be sold into slavery. In the middle of the ocean, the god annoyed with their presumptuousness, made the ship fill with fragrant sweet wine and as the pirates greedily started to drink he turned them into dolphins and they leapt into the sea.
Posted by Intelliblog at 02:02