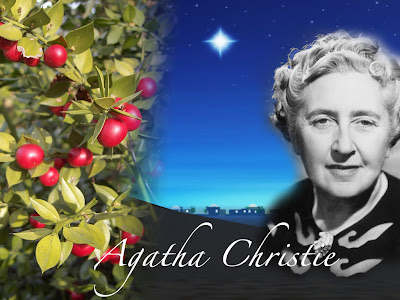 “The best time for planning a book is while you're doing the dishes.” - Agatha Christie
Butcher’s broom, Ruscus aculeatus, is the birthday plant for this day. In the past butchers used to sweep their shops with branches from this bush. Another use of the sprigs of the plant bearing the characteristic red berries was that butchers decorated the Christmas meats with it. A poultice made of berries and leaves was used to treat broken bones and sprains. Astrologically, this is a plant belonging to Mars.

A famous birthday for today is Agatha Christie, English novelist (1890-1976). Her website informs me that September 13th-20th is Agatha Christie week, no doubt centering on her birthday. The annual Agatha Christie Festival on the English Riviera takes place during this week, and over 40 events will take place including plays, open-air cinema screenings, tea-dances, lectures and murder mystery dinners. Other activities are organized around the world to celebrate the “Queen of Crime’s” contribution to the mystery novel genre.

I must admit that during my salad days I was an inveterate Christie fan and had read all her novels by the time I was growing out of my teens. They were well-written and full of quirky characters, good murderous fare and of course the delightful Miss Marple and the logical M. Poirot. I still have quite a lot of her books in my library and plan to have another read of them when I retire. They were so very English all of her novels and so old-wordly…

On this day in 7 BC, as the sun set, a bright star rose in the eastern sky. This was a rare conjunction of the planets Saturn and Jupiter in Pisces, the latter being the planet of kings. Some astrologers suggest that this date marks the birth of Christ and the conjoined planets was the Star of Bethlehem observed by the Magi, or wise men of the East. The constellation of pisces or fishes is also noteworthy as ICTHYS in Greek is fish and also stands acronymically for Iesus Christos, Theou Yios, Soter (Jesus Christ, Son of God, Saviour). The fish has been used since ancient times as symbol for Christianity.
Posted by Intelliblog at 01:49