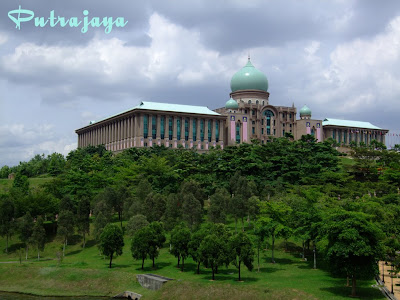 28/9/09
“I soon realized that no journey carries one far unless, as it extends into the world around us, it goes an equal distance into the world within.” - Lillian Smith

I have appointments in central Kuala Lumpur, but also in Putrajaya, at the Cyberjaya University. Putrajaya is a city and federal territory of Malaysia, 25 km south of the capital and serves as the country’s administrative centre. Prior to the construction of Putrajaya, the Malaysian government offices were housed at various locations across Kuala Lumpur. With increasing traffic congestion, however, the distance between the offices began to hinder administrative processes. Consequently, the government resolved to create a new city where the scattered offices could be relocated and reassembled to form a more efficient administrative hub.

The prime minister’s office moved to Putrajaya in 1999. While Kuala Lumpur continued to function as Malaysia's capital (it was the site of both houses of parliament and the first royal palace) Putrajaya gradually expanded to include the Federal Court, the second royal palace, and many other administrative buildings. It was declared a federal territory in 2001. Putrajaya is managed by a corporate body that controls its development. Built on the former site of rubber and oil palm plantations, Putrajaya was developed as a “garden city.” It has an expansive man-made lake and many areas devoted to parks, botanical gardens, and wetlands. From its conception, the city was envisioned as part of a growing high-technology communications research and development corridor stretching southward from Kuala Lumpur. Putrajaya is accessible by numerous rail lines and highways and is in close proximity to the Kuala Lumpur International Airport. It has a population of about 100,000 people.

The photograph is of the Prime Ministerial precinct and palace.
Posted by Intelliblog at 01:15