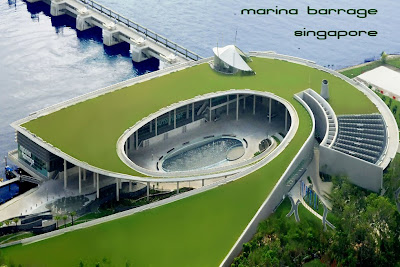 “Nothing would be more tiresome than eating and drinking if God had not made them a pleasure as well as a necessity.” - Voltaire

Last night the Conference Gala Dinner was held at the Marina Barrage. This was an amazing event where all stops were pulled out in order to demonstrate to the world Singapore’s ability to host an “event” to world standards. Marina Barrage bags top honours at international environmental engineering awards and is an architectural showpiece, which is both functional and aesthetically pleasing.  The waterfront icon is the first Singapore project and only the second project outside of the USA in ten years, to win the top award at the American Academy of Environmental Engineers (AAEE)’s Excellence in Environmental Engineering Competition. It was conferred the Superior Achievement Award - the highest honour of the competition for the best project entry – at the AAEE Annual Awards Luncheon held in Washington, DC, USA. Widely considered to be the most prestigious of professional, peer-recognition awards focussed exclusively on the environmental engineering field, the award defines the best in environmental engineering practice: A holistic environmental perspective, innovation, proven performance and customer satisfaction, and contribution to an improved quality of life and economic efficiency. The Marina Barrage beat 33 other entries to take home the top prize in the competition organised by the American Academy of Environmental Engineers (AAEE), becoming the second project outside of USA to win the award, in the last decade.

The dinner was scheduled for 7:00 pm, with cocktails before to welcome the guests and to have them enjoy a special prformance by the Singapore Youth Brass Orchestra. The courtyard in front of Marina Barrage is built on a monumental scale and the ambience is ne of luxury and imposing grandeur. The pre-cocktail menu consisted of champagne or fruit punch accompanied by hors d’ oeuvres: Watermelon with goat cheese and cracked pepper; smoked salmon, lime, crème fraiche and Asian pear; prawn Daikon roll, rosemary ginger vinaigrette; spiced chicken samosas, cilantro and yoghurt.

The dinner was created by Jean-Georges Vongerichten who has received the James Beard award for best chef and best new restaurant, and Esquire magazine voted him the Chef of the Year 1997. His restaurant also holds three Michelin stars, one of the four New York restaurants holding this accolade. The dinner menu was as follows:

During the dinner there was entertainment, with the Odyssey Dance Theatre performing an excerpt from the ballet “Red Tears”. Then the 13-year-old child star Julia Abueva performed a couple of songs and finally Simon Ng sang and led the orchestra in a musical performance. Following that, there were the Singapore Social Innovation Park awards, which honoured achievements by local and overseas attendees to the conference.

The night was quite a brilliant affair which was enjoyed by everyone and it set off the day’s more intellectual activities quite well.
Posted by Intelliblog at 01:10