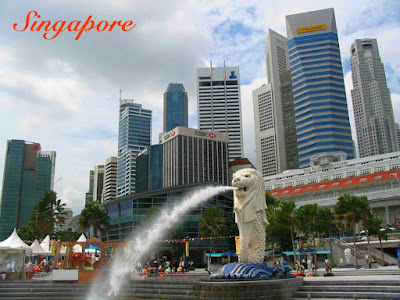 30/9/09
“To travel is to discover that everyone is wrong about other countries.” - Aldous Huxley

Flew into Singapore today and got there just in time for an afternoon appointment I had. I always like visiting Singapore as it is a vibrant, vivacious and ever-busy city. There is quite an energy here, which always manages to draw one in and immerse one in it. Staying at the Holiday Inn, which is quite central and handy to the MTR, the underground train system that is convenient for getting around.

Singapore was founded as a British trading colony in 1819. It joined the Malaysian Federation in 1963 but separated two years later and became independent. Singapore subsequently became one of the world's most prosperous countries with strong international trading links (its port is one of the world's busiest in terms of tonnage handled) and with per capita GDP equal to that of the leading nations of Western Europe. I always think of Singapore as the “Switzerland of Asia”, and this is certainly justified in terms of its small size, prosperity and influence in the region.

One of the things that was immediately obvious was the smoky haze in the atmosphere here. This is because of the immense Indonesian fires that have put a pall of smoke over the region. The massive burning-ff that happens annually so often gets out of control and as well as destroying the rain forest it causes other environmental damage on a wide scale.

Tomorrow I have more appointments, but also over the next three days I am attending the Global Social Innovators Forum 2009, which is a premier event for showcasing achievements in sustainability, social equity and achievement both personal as well as organisational.
Posted by Intelliblog at 12:59