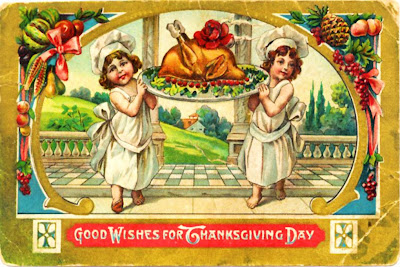 Today is a very special day, an annual national holiday in the United States, which I think more countries around the world should imitate. A day that celebrates the harvest and other blessings of the past year in a family environment, where there is time to stop, reflect and be truly thankful for all the good things that we enjoy in our life often without a second thought, is a great opportunity to exercise some gratitude. We have forgotten being grateful in our everyday lives and we don’t say “thank you” and really mean it, often enough. A family sitting around a table and enjoying a meal together, enjoying each other’s company and thanking God, providence, each other and life for all the benefits they enjoy on a daily basis is a wonderful thing.

Americans generally believe that their Thanksgiving is modelled on a 1621 harvest feast shared by the English colonists (Pilgrims) of Plymouth and the Wampanoag Indians. The American holiday is particularly rich in legend and symbolism. Plymouth's Thanksgiving began with a few colonists going out “fowling,” possibly for turkeys but more probably for the easier prey of geese and ducks, since they “in one day killed as much as served the company almost a week.” They were then surprised by about 90 Wampanoag Indians who appeared at the settlement's gate, doubtlessly unnerving the 50 colonists. Nevertheless, over the next few days the two groups socialised without incident. The Wampanoag contributed venison to the feast, which included the fowl the Pilgrims had caught as well as fish, eels, shellfish, stews, vegetables, and beer. Since Plymouth had few buildings and manufactured goods, most people ate outside while sitting on the ground or on barrels with plates on their laps. The men fired guns, ran races, and drank liquor, struggling to speak in broken English and Wampanoag. This was a rather disorderly affair, but it sealed a treaty between the two groups that lasted until King Philip’s War (1675–76), in which hundreds of colonists and thousands of Indians lost their lives.

The New England colonists were accustomed to regularly celebrating “Thanksgivings,” days of prayer thanking God for blessings such as military victory or the end of a drought. After 1798, the new U.S. Congress left Thanksgiving declarations to the states; with some objecting to the national government's involvement in a religious observance, especially Southerners. Thanksgiving Day did not become an official holiday until Northerners dominated the federal government. In the mid-19th century, the editor of the popular magazine “Godey's Lady's Book”, Sarah Josepha Hale, campaigned for a national Thanksgiving Day to promote unity. She finally won the support of President Abraham Lincoln. On Oct. 3, 1863, during the Civil War, Lincoln proclaimed a national day of thanksgiving to be celebrated on Thursday, November 26.

The holiday was annually proclaimed by every president thereafter, and the date chosen, with few exceptions, was the last Thursday in November. After a joint resolution of Congress in 1941, President Roosevelt issued a proclamation in 1942 designating the fourth Thursday in November (which is not always the last Thursday) as Thanksgiving Day. As the country became more urban and family members began to live farther apart, Thanksgiving became a time to gather together. The holiday associated with Pilgrims and Native Americans has come to symbolize intercultural peace, America's opportunity for newcomers, and the sanctity of home and family.

In the colonial period, days of thanksgiving were also celebrated in Canada. They arose from the same European traditions, in gratitude for successfully completed journeys, attainment of peace, and plentiful harvests. The earliest celebration was held in 1578, when Martin Frobisher held a ceremony in present-day Newfoundland to give thanks for a safe arrival in the New World. In 1879 Parliament established a national Thanksgiving Day on November 6; the date has varied over the years. Since 1957 Thanksgiving Day has been celebrated in Canada on the second Monday in October.

Happy Thanksgiving to our American friends. Be truly grateful for all good things in your life. There is plenty to be thankful for!

gratitude |ˈgratəˌt(y)oōd| noun
The quality of being thankful; readiness to show appreciation for and to return kindness: She expressed her gratitude to the committee for their support.
ORIGIN: Late Middle English: From Old French, or from medieval Latin gratitudo, from Latin gratus ‘pleasing, thankful.’