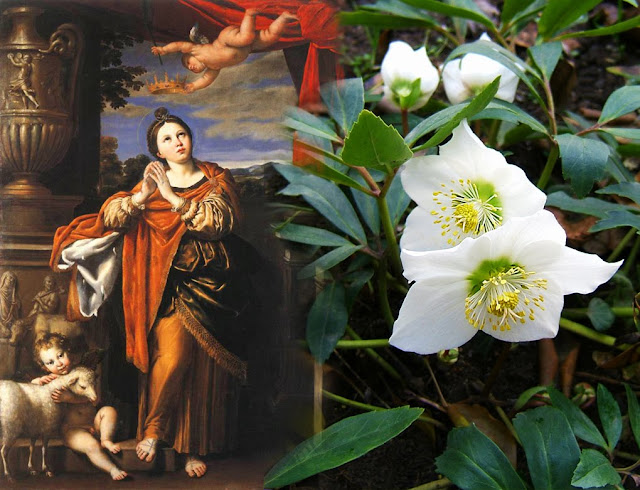 “Faith is the bird that sings when the dawn is still dark.” - Rabindranath Tagore


Today is the feast day of St Agnes, who was held in very honour amongst all of the virgin martyrs of Rome by the primitive church, since the fourth century. Her name in Greek means “pure” and the Christmas rose, Helleborus niger, is dedicated to St Agnes.  Her feast day was celebrated on this day from 354 AD. Although there are numerous apocryphal stories regarding her martyrdom, there is no accurate and reliable narrative, at least in writing, concerning the details of her life and death. One thing seems to be universally agreed upon, this being that she was only 12 or 13 years old when she died a violent death under torture.

According to tradition, she was a beautiful virgin who turned away all suitors, declaring that she could have no spouse but Jesus (nuns are still to this day known as “Brides of Christ”). The rejected suitors informed Roman officials that she was a Christian, and she was punished by being exposed in a brothel. There she was left miraculously unharmed; the only man who attempted to violate her was struck blind, and she healed him with prayer. She was later murdered during the persecutions ordered by Diocletian, which occurred in 304 AD. After this point, Agnes's name appears several times in the historical written record. In the decades after her death, Agnes's tomb became a place of pilgrimage and she is considered a protector saint of young girls.

On St Agnes's feast day, two lambs from the Trappist monastery at Tre Fontane outside Rome are adorned with crowns and ribbons of red and white and blessed at her church by the Pope. They are then taken to the abbey of St. Cecilia in Trastevere, in Rome, where Benedictine nuns raise them. Their wool is shorn on Holy Thursday, and palliums (or pallia, if you want to be picky!) are then made from it. These are circular ceremonial bands worn over the shoulders in Roman Catholic ecclesiastical dress and signify one of the highest church offices. The Pope bestows a dozen or so annually to his archbishops.

Young girls in England made cakes on this day to commemorate St Agnes’s martyrdom. In some villages, once the cakes were made, the young women took one and climbing the stairs backwards, prayed to St Agnes and then ate the cake. This ritual was meant to reveal in a dream the man the young woman was to marry. Several other divinatory traditions relate to St Agnes. On St Agnes’s Eve, young women took their shoes put a sprig of rosemary in one, a sprig of thyme in the other, sprinkled them with water, placed them one on each side of their bed and said:
St Agnes, that’s to lovers kind,
Come ease the trouble of my mind.
They would then dream of their future husband.

pallium |ˈpalēəm| noun ( pl. pallia |ˈpalēə| or palliums )
1 a woolen vestment conferred by the pope on an archbishop, consisting of a narrow, circular band placed around the shoulders with short lappets hanging from front and back.
2 historical a man's large rectangular cloak, esp. as worn by Greek philosophical and religious teachers.
3 Zoology the mantle of a mollusk or brachiopod.
4 Anatomy the outer wall of the mammalian cerebrum, corresponding to the cerebral cortex.
DERIVATIVES
pallial |ˈpalēəl| adjective (in senses 3 and 4) .
ORIGIN Middle English: from Latin, literally ‘covering.’
Posted by Intelliblog at 00:43