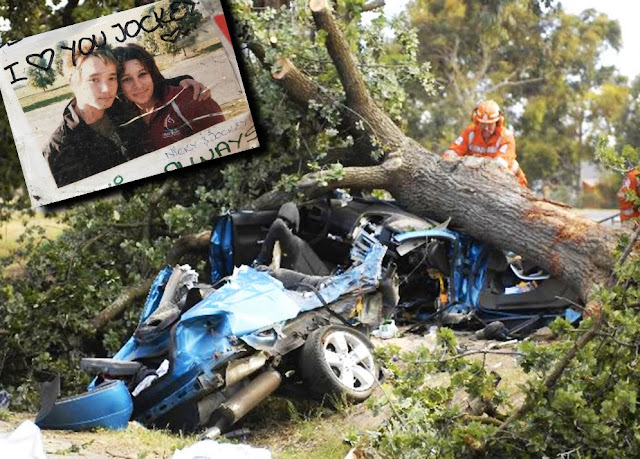 “Out of this nettle, danger, we pluck this flower, safety.” - William Shakespeare

At the weekend, there was a horrific fatal car crash in a suburb a few kilometers from where we live. I know the road where it happened as it is a couple of blocks up from my previous job. Plenty Rd, the main road there is already notorious for car crashes and there are several markers on the verge commemorating the lives lost. It is a long straight stretch of road leading to the outer suburbs, with two lanes on either side, separated by a median strip planted with bushes and greenery.

The accident claimed the lives of five teenagers last Sunday and the 19-year-old driver was possibly intoxicated (toxicology reports are pending). The driver, who was also a P-plater had been drinking at a party immediately before taking the wheel of the car. The car hit a large tree after mounting the median strip and spinning out of control, at an estimated 150 km/hr. The immense force of the impact uprooted the tree and caused it to fall on the wrecked car. Five young men died at the scene and the sole survivor was a 15-year-old girl, whose brother bravely put his body across her to protect her from the impact. She is presently in hospital fighting for her life.

Distraught relatives of the same young man who protected his sister have described him as a fine young man who liked fast cars. His uncle and aunt were at a loss to comprehend why Anthony would be in a car travelling at a speed of at least 140kmh or why he would allow his little sister to be in that Ford Falcon XR6 sedan with him. As soon as the girl recovers she may be able to shed some light in the events that surround the accident. However, it is simple to understand the basics: Youth + alcohol + fast cars + inexperience = Fatality.

The very next day after the crash, three more teenagers were caught driving at high speeds within 10km of the same crash site. Police early on Monday morning intercepted a 19-year-old probationary driver from South Morang driving at 165km/h in a 70km/h zone along Mahoneys Road, Reservoir. He is to be charged on summons for excessive speed. Less than an hour later, an 18-year-old driver was caught in McDonalds Road, Epping, travelling at 89km/h in a 60 zone. A 19-year-old woman, also a P-plater, was detected driving at 106km/h along the same road about 2.30am Monday morning.

These drivers will lose their driving licence for one month and six months respectively, however, the Assistant Commissioner of Police, Mr Lay, conceded that hoon legislation doesn’t seem to be working. Already there are proposals to confiscate cars of young drivers who commit serious traffic offences (related to alcohol and speeding mainly). The cars should be crushed, some people suggest, while others say that they should be sold and the money donated to rehabilitation hospitals. Others suggest that speed delimiters be fitted to probationary drivers’ cars. In any case, the crash has started a big debate on the failing measure that are in place to reduce teenage fatalities on our roads.

I keep thinking of the families of the five dead teens. Imagine the telephone or the doorbell ringing in the middle of the night and being confronted with news of this sort. The sheer waste of young life, the immense stupidity of a few minutes that culminated in a few seconds of alcohol-fuelled, excess speed. I think of the young man who shielded his sister and try to imagine what was going through his mind for those last few split seconds. I think of that young girl who survived waking up in hospital asking to see her brother and her friends. Will she be able to sleep without having nightmares ever again? Lives lost, lives broken.

The grandmother of one of the victims encapsulates the pathos of the whole situation in one of the meorial notices published in the newspaper today:
“A young man who lost his way, Rest in peace. Love – Nanna”.
Posted by Intelliblog at 21:29