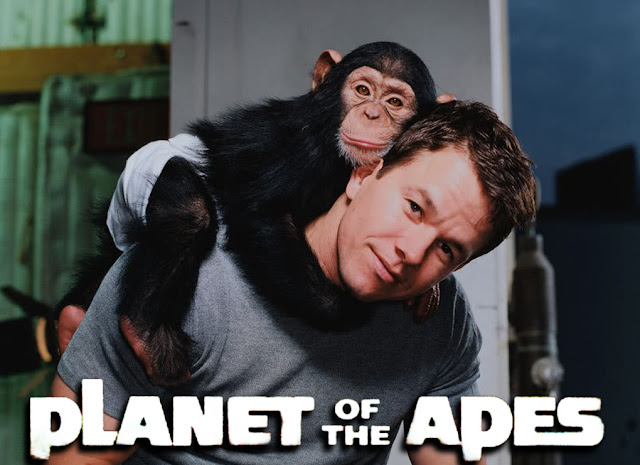 We wanted some pure escapist nonsense on Sunday afternoon, as we stayed in, did some housework, some gardening and we were depressed enough with the news of the last week. We decided to watch the Tim Burton 2001 remake of “Planet of the Apes”. Of course we had seen the Franklin Schaffner 1968 original “Planet of the Apes” with Charlton Heston, but knew nothing of this remake. It was on special at the DVD shop so I had bought it on impulse, seeing it was directed by Tim Burton. Well. Its time to be watched came yesterday.

Burton has some good, offbeat films to his name: “Beetlejuice”, “Batman”, “Edward Scissorhands”, “Batman Returns”, “Ed Wood”, “Mars Attacks!”, “Sleepy Hollow”, “Big Fish”, etc, etc. I thought that if he were involved in a remake of a classic such as “Planet of the Apes” it would have a new twist, a new retelling of a familiar tale. The film was watchable, but not of the high standard of “Edward Scissorhands” or “Ed Wood”, for example. Compared to the original, Burton’s version fails on several grounds. The young protagonist Captain Leo Davidson, played by Mark Wahlberg is overwhelmed by the men in monkey suits and cannot command enough presence to even touch upon the heroic stature of Heston. He is still wet behind the ears as far as a heroic lead is concerned and his acting although tolerable is simply not commanding enough. The apes have the benefit of state of the art advanced make-up technology and the villainous Thade (played by Tim Roth) does an excellent job of aping it up, easily the best actor on the set. Ari (played by Helena Bonham Carter) tries to do as much as possible with her role, but the material she has to work with is flimsy. Kris Kristofferson has a cameo appearance as Karubi, an enslaved human (a waste of his talent, I think) and Estella Warren (playing Daena the scantily daughter of Karubi) provides some eye candy (I think she only uttered a dozen words in the whole film!) but is otherwise a weak ove interest and is easily overwhelmed by Ari, the apess(!).

The sets and cinematography are very good and the two moons of the planet look quite fetching in the sky. The ape city is convincingly alien and the ruined spaceship set is quite good. The battle scene is staged competently and the special effects are good. I loved the space pods (I want one for Christmas!) and the real chimps were cute and provided some pathos at times.

There was one flaw that made the whole movie predictable and its ending a given. When Captain Davidson gets in the pod and encounters the electromagnetic storm, we see the controls of his console. How much better the film would have been if we had not seen that vital detail – please oh please cut it out! Hence the surprise punch of the scene with the Statue of Liberty in the original movie! I also found the final scene of the remake very corny and a set up for a sequel if ever there was a set up for a sequel (however, thankfully, a sequel did not eventuate!).

The movie’s basic premise and “moral” if you like, is very much watered down compared to the original. In Schaffner’s original film, the apes are the only intelligent and articulate beings on the planet. Although they have only attained a pre-industrial level of civilisation they are a far more advanced species than the planet’s humanoid inhabitants, who lack the powers of speech and reason and live an animal-like existence. A true role-reversal. In Burton’s remake, humans and apes have similar powers of speech and intellect. The only reason humans are slaves is that the apes have greater physical strength, which enables them to dominate the planet even if they are a minority. The apes in the original film are noble and more civilised than humans. In Burton’s version, they are more aggressive and more obviously animals than in the original film; they can still move on all fours and emit fierce shrieks whenever angry or excited. The planet’s human population are like “noble savages” who long for freedom from the domination of the apes, and a few liberal, pro-human apes, especially Ari, the daughter of an ape senator are “human rights activists” who wish humans and apes to live as equals.

Overall, the film was good for a Sunday matinee, which was when we watched it and it provided s with a few laughs. Watch it as a curiosity, as a “passa-tiempo”, as a bit of escapist nonsense.
Posted by Intelliblog at 21:33