A BOOK AND FILM REVIEW 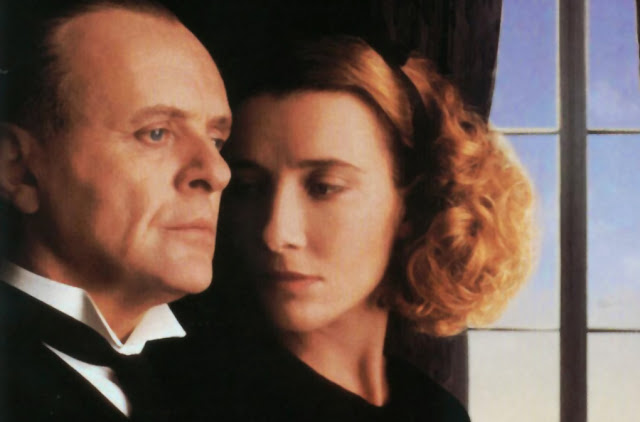 “Do not do an immoral thing for moral reasons.” - Thomas Hardy

My first day back at work today was very busy with meetings, lots of correspondence and emails to attend to, as well as catching up with all the staff. In the morning, I planned to get in extra early, so at 6:20 am, I was at the train station, only to find out that my train had been delayed for 15 minutes. I ended up getting in at work at 7:05 am, about my usual time even when I get the next scheduled train. The joys of our privatised public transport system…

Last weekend we watched an excellent movie. This was the 1993 James Ivory drama “The Remains of the Day”, starring Anthony Hopkins, Emma Thompson, Christopher Reeve and Hugh Grant. It is based on a novel by Japanese/British novelist, Kazuo Ishiguro. “The Remains of the Day” (1989) is the third published novel of Ishiguro and is one of the most highly-regarded post-war British novels. It won the Booker Prize in 1989 for Best Fiction, and ranks in the Sunday Times list of the 100 greatest novels. The film is an excellent adaptation of the novel with the leads amazingly well cast and giving a recital of their considerable acting abilities. Anthony Hopkins in particular, is exceptional in this film.

This is gently flowing, lilting movie with little action or incident, yet it is amazingly involving and there are some strong undercurrents of bottled up emotion, as well as a philosophical consideration of ethics, as seen from different viewpoints. Personal morality is also explored and there are also developed strong themes of racism and class inequality. Ishiguro has written a remarkably English novel that captures the spirit of the time and place of pre-second World War England, with some amazingly astute characterisations of the people of a vanishing species. The author, although born in Japan was raised and educated in England and has understood his adopted country exceedingly well, as his novel shows.

The story concerns James Stevens, an English butler, who dedicates his life to the loyal service of Lord Darlington (who is sketched out in increasing detail in flashbacks). The novel begins with Stevens receiving a letter from an ex-colleague Miss Kenton, previously the Housekeeper at Lord Darlington’s estate, describing her married life, which Stevens believes hints at her unhappy marriage. The receipt of the letter allows Stevens the opportunity to revisit this once-cherished relationship, if only under the pretext of possible re-employment of Mrs Benn (as Miss Kenton now is) at the Estate. Stevens’ new employer is a wealthy American (Mr. Farraday) who encourages Stevens to borrow a car to take a well-earned break, a “motoring trip”. On his trip to meet Mrs Benn, Stevens has the opportunity to reflect on his unmoving loyalty to Lord Darlington, the meaning of the term “dignity”, and even his relationship with his now deceased father. Ultimately Stevens is forced to ponder the true nature of his relationship with Miss Kenton during their time together at the Estate. As the film progresses, we become aware of Miss Kenton's one-time love for Stevens, and his for her.

Working together during the years leading up to the Second World War, Stevens and Miss Kenton fail to admit their true feelings. All of their recollected conversations show a professional friendship, which came close but was never given the opportunity to cross the line into romance. Miss Kenton, it later emerges, has been married for over 20 years and therefore is no longer Miss Kenton but has become Mrs. Benn. She admits to occasionally wondering what her life with Stevens might have been like, has come to love her husband, and is looking forward to the birth of their first grandchild. Stevens muses over lost opportunities, both with Miss Kenton and with his long-time employer, Lord Darlington. At the end of the film, Stevens focuses on the “remains of his day”, which has a multiplicity of meanings:  His future service with Mr. Farraday; the evening of his life and the wreckage he has made of it; the last vestiges of England’s grand houses – the estates in one of which Stevens serves; and the remains of the British Empire, once great, but at the time of Stevens’ writing of the letter, on the verge of complete and utter collapse…

Stevens comes to realise also that perhaps his utter and unquestioning loyalty to his master, Lord Darlington may have been misguided as his master had actively cultivated ties with the Nazi cause. This is an understated moral and ethical dilemma that Stevens was always aware of but actively ignored under a veneer of faultless service to a master he considered to be fair, benign, noble and above all else, a gentleman. His wish to be the perfect butler, the perfect “gentleman’s gentleman” has supervened and has quashed his responsibility to himself as a human being.

This is an excellent film, which is a good adaptation of an excellent novel. See it or read the novel, or both!
Posted by Intelliblog at 21:15