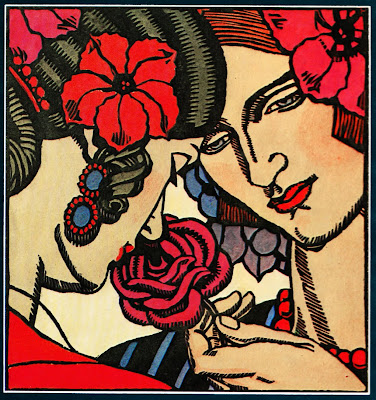 “And she was fair as is the rose in May.” – Geoffrey Chaucer

Had a very relaxing Sunday today with no work being done at all! We went out for a drive in the morning, visited a Sunday Market and then came back home, had lunch and watched a movie. In the afternoon, I played some music and then we went out to dinner.

For Art Sunday today, and Australian artist, Thea Proctor (1879-1966) or to give her full name, Alethea Mary Proctor. She was born in NSW and studied under Julian Ashton in Sydney, and in London. Her work is notable for its great fluidity of line and the delicate colouration of her watercolour paintings along with black-and-white and hand-coloured prints. She specialised in relief prints and designs and her influence brought public attention to the linocut and woodcut.

Although Proctor's work was comparatively conservative, in Australia it was considered “dangerously modern”. In 1932 Art in Australia devoted an issue to her work. She taught design at Ashton’s Sydney Art School and privately, introducing many young artists to linocut printing, and in the 1940s taught drawing for the Society of Arts and Crafts.

Considered an arbiter of taste and always elegantly dressed, Thea Proctor wrote on fashion, flower arranging, colours for cars and interior decoration. She organized artists’ balls in the 1920s, designed the fashionably modern Lacquer Room restaurant (1932) for Farmer & Co. Ltd and produced theatre décor in the 1940s. In her latter years she continued to encourage young and innovative artists and to paint, in a looser, sensuous manner, carried out portrait commissions, exhibited regularly with the Macquarie Galleries and promoted the neglected work of her relation John Peter Russell. She commented: “I am not the sort of person who could sit at home and knit socks”. Unmarried, Thea Proctor died at Potts Point on 29 July 1966 and was cremated with Anglican rites.

The work illustrated here is in the Gallery of New South Wales and is entitled “The Rose” (ca1928). It is a woodcut, printed in black ink, from one block and subsequently hand-coloured. Such works explored form and colour in ways previously not attempted, and reflect the challenging thinking of the time and leadership demonstrated by Thea Proctor. In her works, she highlighted a modernist aesthetic link that Australia had not seen before.
Posted by Intelliblog at 00:27