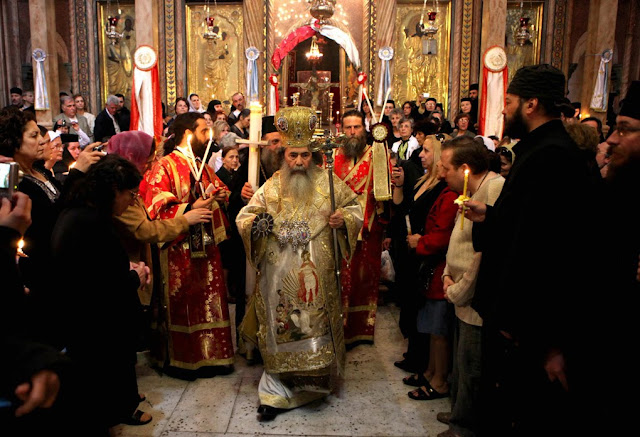 “All religions must be tolerated for every man must get to heaven his own way.” - Frederick the Great

Another long day at work today, but now I am looking forward to a break with four days of holiday. Easter is always a time of rest and relaxation here in Australia, as most people take the opportunity to go away and spend some time away from home, enjoying the autumnal weather. The religious aspect of the holiday is very much underplayed and if people go to church it is usually only for the Easter Sunday mass or service.

Greek Australians still maintain the traditions of the “old country” and the whole of Holy Week before Easter is devoted to religious activities and traditions surrounding the Passion and Resurrection. The Greek Orthodox church has often been referred to as the “Church of the Resurrection”, as its greatest holy day is Easter. Most Western churches place greater emphasis on Christmas, prompting the remark that Western Christianity is still in its infancy whereas Orthodoxy is mature. The criticism is unfounded and perceived degrees of importance assigned to different holy days cannot be used as a yardstick for the philosophical slant that one church may have compared to another, however, the Eastern church emphasises Easter as the “Feast of Feasts”.

Holy Week in the Eastern Orthodox Church encasulates the sanctity of the whole calendar year of the Church. Its centre of commemorations and inspiration is Easter, where the Resurrection of Jesus Christ is celebrated. Every Sunday is dedicated in the Eastern Orthodox Church to the Resurrection. One hundred days also are also directly dedicated to Easter, 50 before it for preparation, and another 50 after it for commemorating the glorification of Jesus Christ.

St John Chrysostom’s mass is the culmination of the resurrection liturgy, in which the congregation is enjoined to: “Take part in this fair and radiant festival. Let no one be fearful of death, for the death of the Saviour has set us free...O Death, where is thy sting? O Hades, where is Thy victory? Christ is Risen and Thou art overthrown. To Him be glory and power from all ages to all ages.”

religion |riˈlijən| noun
The belief in and worship of a superhuman controlling power, esp. a personal God or gods: Ideas about the relationship between science and religion.
• Details of belief as taught or discussed: When the school first opened they taught only religion, Italian, and mathematics.
• A particular system of faith and worship: The world's great religions.
• A pursuit or interest to which someone ascribes supreme importance: Consumerism is the new religion.
PHRASES
Get religion informal be converted to religious belief and practices.
DERIVATIVES
Religionless adjective
ORIGIN Middle English (originally in the sense [life under monastic vows]): from Old French, or from Latin religio(n-) ‘obligation, bond, reverence,’ perhaps based on Latin religare ‘to bind.’
Posted by Intelliblog at 01:05