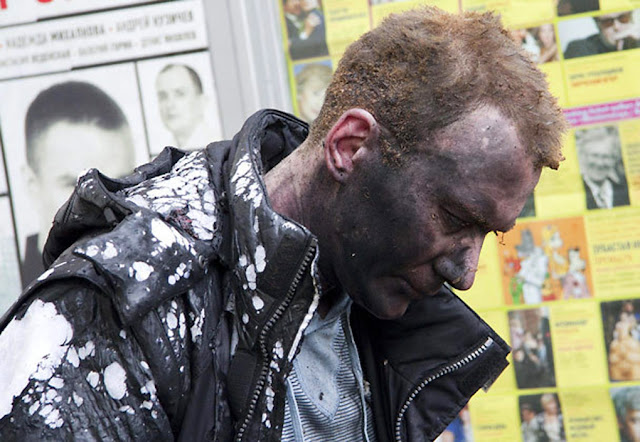 “True courage is not the brutal force of vulgar heroes, but the firm resolve of virtue and reason.” - Alfred North Whitehead

The atrocious terrorist attack in the Moscow Metro yesterday has once again made me wince with consternation and distress. The reality of terrorism in our days is something that we are not permitted to forget as daily events around the world draw attention to desperate and extreme acts performed by minorities that attempt to draw attention to their cause. These are cowardly acts of blackmail and instead of support and sympathy (for whatever cause) they attempt to garner, all they do is to succeed in gaining the revulsion and opposition of any person with a shred of humanity within them.

I was not interested to learn more about which organisation or group was behind this latest mass slaughter in Moscow, or the reasons for this madness. All I want is that the perpetrators be found and punished as befits criminals and murderers of the worse kind. Sympathy with their cause or interest in their point of view is the thing most distant in my mind at this point. The image of masses of innocent commuters packed into trains making their way to work that were killed is with me as I get into my train every morning. These ordinary people like you and me, are the victims of terrorists not of liberation fighters, of assassins not of idealists, of fanatics not of visionaries.

One of the most distasteful aspects of the attack is that the suicide bombers were women. Even if these women had lost husbands and children, how could they sink into the same quagmire of hate and violence that destroyed their own families? Does killing several tens of innocent civilians compensate them for their loss? An eye for an eye and a tooth for a tooth is a barbarity that is propounded by violent and uncivilised brutes whose motivation is the same as that of the criminal they are intent on punishing.

The atrocity was preceded by yet another terrorist attack, this time in Athens, late on Sunday night. A 15-year-old Afghani boy was killed and his mother and his 10-year-old sister wounded when a home-made pipe bomb exploded. The boy was looking in a bag in a rubbish bin containing the bomb, when the blast occurred. The girl was taken to a children’s hospital with burns to her face and hands, as well as bruising. Her mother, who was in a state of shock, was also injured and taken to a different hospital. No group has claimed responsibility and the terrorist attack has blighted the streets of a residential area of another European city whose inhabitants are living a hard enough life already.

The bomb exploded outside the offices of the Hellenic Management Association, a non-profit organisation. Since a teenager was shot dead by a policeman in Athens in December 2008, there have been frequent attacks on public buildings. Most of these blasts have been blamed on far-left and anarchist groups, but typically these explosions have been minor and caused no injuries. Last week, three bombings targetted the offices of an ultra right wing party, a police immigration centre and a Pakistani immigrant leader’s home. The “Conspiracy Nuclei of Fire” group claimed responsibility for those bombings and said they were intended to highlight racism in Greece.

The father of the killed boy visited the site of his son’s death today. He and his family migrated to Greece for a better life. He couldn’t speak Greek or English but his sorrow was immediately and palpably intelligible as it needed no words to convey the immense sense of loss and devastation he felt. He knelt and wept at the steps where his son lost his life. He sobbed and bewailed his fate. He escaped terror in his own country, searching for a better life in a distant land and all he found was death and endless misery from now on. What sort of society are we becoming? The savage beasts of the jungle are less terrible and less brutal than we humans are. We take cut the thread of human life as easily as if we were chopping the stalk of a lettuce.

Dare we call ourselves civilised? Can such a civilisation survive? Hw can we end this chain of violence and terror we have become trapped by?
Posted by Intelliblog at 21:27