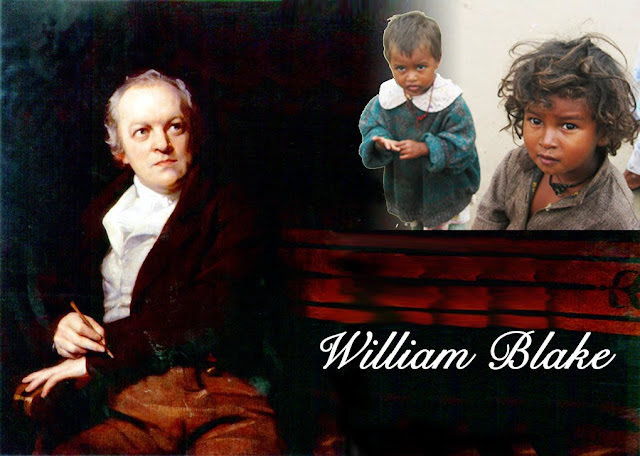 “If the misery of the poor be caused not by the laws of nature, but by our institutions, great is our sin.” - Charles Darwin

I had a very busy day at work today, working uninterruptedly from 7:00 am until past five in the afternoon. I got an almighty headache afterwards and had to rush out. The afternoon was warm and sunny, beautifully autumnal. The train was packed and once again I thought of the poor people in the Moscow Metro bomb blast. Do we prepare ourselves every day, every moment to meet our death? We should…

Is this a holy thing to see
In a rich and fruitful land, -
Babes reduced to misery,
Fed with cold and usurous hand?

Is that trembling cry a song?
Can it be a song of joy?
And so many children poor?
It is a land of poverty!

And their sun does never shine,
And their fields are bleak and bare,
And their ways are filled with thorns:
It is eternal winter there.

For where'er the sun does shine,
And where'er the rain does fall,
Babes should never hunger there,
Nor poverty the mind appall.

Aptly for Holy Week, today Blake’s observations on society and the inequality between rich and poor come to the fore in this poem written as a comment on the charity distributed to the poor around Eastertime. Blake thought charity to be evil, and that it was an easy way for the rich to make themselves feel better. He abhors the social system that allows the rich to become richer and the poor to become poorer. Usury (action or practice of lending money at unreasonably high rates of interest) is a word we seldom hear nowadays, though it is so widespread. Dante in his hell reserves delicious tortures for the usurers. Even in these bleak days of the “financial crisis”, the greedy banks and loan companies still continue to practice the state-sanctioned usury while the bankers grow fatter on their obscene salaries.

The poet bemoans the fact that even though these poverty-stricken children live in a rich land, they are dependent on charity to survive. If poverty were to be wiped out, one wouldn’t need charity nor pity. The hymns sung by the poor children to praise the glory of God cannot be heard by Blake and make him rejoice as all he hears are wails of despair, coming from children who protest their endless wintry lives.

William Blake (28 November 1757– 12 August 1827) was a complex man. He was a poet, illustrator, engraver, draughtsman, but his efforts, due to the unorthodox nature of his work, were highly unappreciated during his lifetime. Working as an engraver he learned many things, things that helped him to surround one of his poems with his own hand-coloured illustrations. Among his most important works are the “Illustrations of the Book of Job” (1825), and the hundred watercolours to Dante's “Divine Comedy”. A mystical and deeply religious man, Blake claimed he had visionary experiences. His social and political conscience railed against the prevailing academic painting of the eighteenth century.
Posted by Intelliblog at 21:39