A NIGHT AT THE OPERA 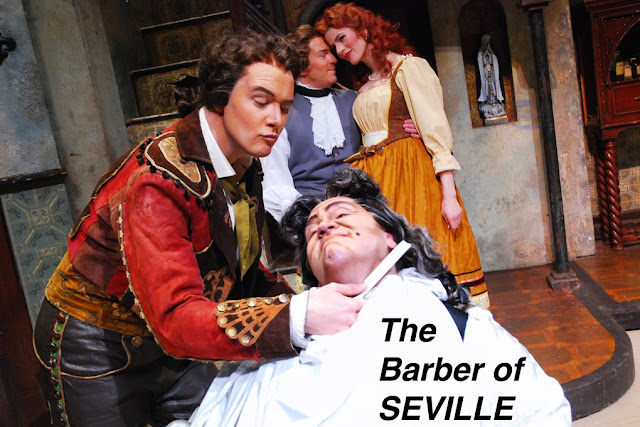 “No good opera plot can be sensible: People do not sing when they are feeling sensible.” - W.H. Auden

Last night we went to the Opera and saw Rossini’s masterpiece “The Barber of Seville”. It was a Melbourne Opera Company production staged at the Athenaeum theatre and we had a delightful time. Melbourne Opera prides itself on its commitment to producing high quality, accessible performances for the benefit of audiences and performers. It has an ensemble of dedicated performers and administrators, and they aim to provide opera of the highest standard to audiences of all ages and backgrounds at affordable prices. The company was only founded in 2002 as a non-profit public arts company dedicated to producing opera and associated art forms at realistic prices. At the performance last night, the company’s patron, Lady Potter announced a partnership with Monash University, which will no doubt greatly stimulate this company to go onto bigger and better things.

The Athenaeum Theatre is a Melbourne institution, founded in 1839. Originally it was called the Melbourne Mechanics’ Institute. This was expanded in 1846 to the Melbourne Mechanics’ Institution and School of Arts. The building on Collins Street was completed in 1842. The Athenaeum played a role in the establishment of Mechanics’ Institutes in Victoria. The Institution changed its name to the Melbourne Athenaeum in 1873. At that time, as now, a major activity was a library. The theatre in its present form was created in 1921. The theatre was the first venue in Australia to screen talking pictures. It is an intimate theatre, which nevertheless retains a classic appearance with stalls, dress circle and upper circle, quite commodious in its entirety. The stage and orchestra pit have been recently refurbished and renovations are now in full swing, made all the more urgent by the flood damage from last Saturday’s storm (the show did go on, however!).

“The Barber of Seville” is derived from a play by Beaumarchais and introduces the likeable rogue, Figaro, who is a barber and general factotum of the city. He aids the Count Almaviva to win the affections of Rosina, the pretty young ward of Dr Bartolo (who lusts after her and wishes to marry her himself). The music of “The Barber of Seville” is too well known to require me talking about it at length here. It shows the composer in his most brilliant, amusing and most exhilarating mood, and sparkles with wit and fancy. Amongst his most familiar numbers are the Count’s serenade, Figaro’s celebrated description of his various duties, Basilio’s plotting aria, Rosina’s chamber aria, the ingenious dragoon finale of first Act, and the music-lesson. The well-known overture, as now played, was not originally composed for the opera, but had done varied service in other works.

Rossini wrote “The Barber” to the commission of the manager of the Argentina Theatre, at Rome, where it was first produced in February 1816. According to contract, it had to be finished by a very near date, and for thirteen days poet and composer had scarcely time to eat, while they slept (on a sofa) only when they could no longer keep their eyes open. Although the opera was not successful on its first few performances, within a couple of weeks it reaped the success it deserves. Before long it had spread all over Europe, with performances from London to St. Petersburg. In 1825 it became the first opera ever sung in Italian in New York City, and Rossini was arguably the most popular composer in the world. Rossini’s masterwork is still indisputably the most popular opera buffa (comic opera) of all-time.

The cast comprised international star Sally-Anne Russell stars as Rosina, with the dashing Phillip Calcagno as Figaro and Margaret Haggart as Berta; Operatunity Oz star Roy Best as Count Almaviva, popular baritone Ian Cousins as Dr Bartolo and David Gould as Basilio. The small orchestra was competent enough (except for some initial jitters from the brass section in the overture) and the harpsichordist did a marvellous job the whole performance through.

We had a delightful evening and enjoyed the performance very much. If you are in Melbourne do go and see it, it’s a good night out!

athenaeum |ˌaθəˈnēəm| (also atheneum) noun
Used in the names of libraries or institutions for literary or scientific study: The Melbourne Athenaeum library and theatre.
• Used in the titles of periodicals concerned with literature, science, and art.
ORIGIN mid 18th century: via Latin from Greek Athēnaion, denoting the temple of Athena, goddess of wisdom.

Here is a clip with Figaro’s famous aria “Largo al Factotum della Città” sung by Pietro Spagnoli in the famous production of Teatro Real in Madrid.