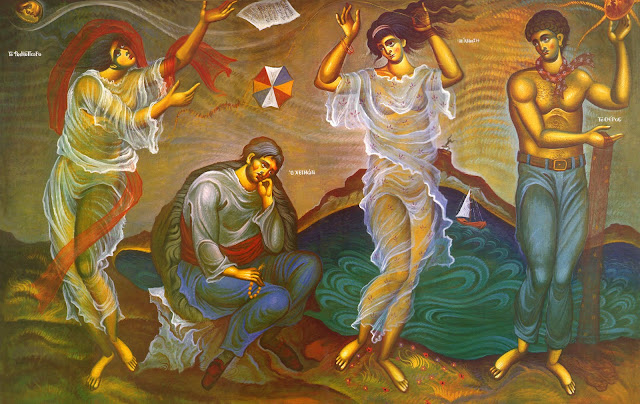 “Certain thoughts are prayers.  There are moments when, whatever be the attitude of the body, the soul is on its knees.” - Victor Hugo

For Art Sunday, a contemporary Greek artist, George Kordis (Γεώργιος Κορδής). George Kordis was born in Greece in Makryracchi of Phthiotis in1956, and grew up in Athens. He studied theology in the Theological School of the University of Athens and concurrently studied Byzantine iconography under the tutelage of Cypriot hagiographer Symeon Symeou. He obtained a Master of Theology at the Holy Cross Seminary in Boston and also studied art at the School of Art of the Boston Museum. When he returned to Athens he continued his art studies in painting and engraving under Fotis Mastichiadis. He has become an expert in theology and the aesthetics of Byzantine painting. In 1991 he obtained a Doctorate of Theology and since 2003 he is a lecturer in the Theological School of the University of Athens.

His painting style owes much to the Byzantine tradition. He uses examples of Byzantine lay painting to set the stage for his subjects, which are often indebted to the West for their iconographic references and technique. He has exhibited his work widely, in more than 25 personal exhibitions and even more collective ones. His works are in many public and private collections.

As a hagiographer, he has an intimate knowledge of the past Byzantine riches of the icon, but he does not simply copy old works, he creates his own personal style, which although is traditional and builds on solid historical foundations, is fresh and startlingly original. He has painted many icons, but also has created the mural decorations of many churches in both Greece and abroad.

The painting above is his personal interpretation of the seasons personified. First comes Autumn losing a page of manuscript in the rising wind. Then pensive ageing Winter, playing with his worry beads. A youthful Spring rejoices in the flower-filled meadow at the feet and the flying kite of the beginning of Lent. Summer s a young fisherman, grasping the sun and ready to set sail with his nets in the green sea. A beautiful tableau of the year’s cycle.
Posted by Intelliblog at 01:42