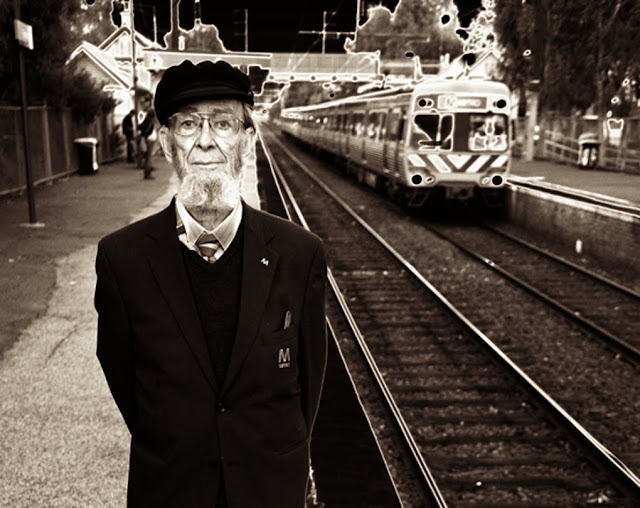 “It is clear that the way to heal society of its violence... and lack of love is to replace the pyramid of domination with the circle of equality and respect.” - Manitonquat

I wrote yesterday on my blog about the railway station close to my house where I board the train every morning when I commute to work. I am rather lucky in that this station is well-cared for, has a strong sense of community and there are many “regulars” who see each other every morning (and often every evening on the return journey). A large part of the sense of community is the stationmaster, Peter Leith. His cheery face and friendly greeting every morning directed at all the commuters ensures that one’s day begins well. He has a calm manner, a kindly word for all and a good sense of humour.

This is an important element in maintaining safety, security and does much to discourage threatening or unruly behaviour at the station. Unfortunately, nowadays we have to be on guard every minute of the day and be wary in public places lest we fall victim to some senseless act of violence. Fortunately, In Melbourne this is not as common as in some other parts of the world, and where I live is much safer than in other suburbs. However, it is part of life and one has to be always vigilant and alert.

To the point is the incident that occurred at the Gardenvale railway station here in Melbourne, last Sunday. A 16-year-old was the victim of a bashing by a gang of youths, who struck him violently and pushed him off the platform onto the train tracks. The poor boy had been bullied at school and on Facebook for some months by the same gang members that attacked him at the train station. The station was not deserted, about twenty adults were there at the time.

The boy’s mother said that her son had walked his girlfriend to the railway station to see her safely onto a city-bound train, but the assailant and his accomplices saw him and attacked. They held his girlfriend back, while the assailant king hit the boy so he fell to the ground and he was kicked multiple times in the back. While many adults witnessed the attack, no-one lifted a finger even as one yelled out “someone, please help him”.

Fortunately, someone did do something. The rescuer was 17-year-old Sam Porter on the opposite side of the track. He witnessed the incident, horrified and jumped down the platform to get back up on the city side. Young Sam wasn’t prepared to just stand by while someone was bashed. His mother was a former police officer and he says that he was brought up to help people in need. The real surprise for Sam was that that no-one else joined in to help him in rescuing the attacked youth.

The bashed boy was prepared to lie on the tracks and put an end to his life, he confessed later. He felt absolutely desperate and humiliated. He was thoroughly demoralised after months of taunting, false rumours, and comments posted on Facebook. If it weren’t for Sam, the boy’s mother said, her son could well be dead now.

Gardenvale station is not in a ghetto or a poor working-class suburb. It is situated in Melbourne’s blue-ribbon suburb of Brighton where house prices fetch millions of dollars at auction and where the idle rich parade through shopping streets where shops display expensive imported items and the cars parked nearby are Jaguars, Porsches, Mercedes and BMWs. The youths could well have been born with a silver spoon in their mouths. Sam said that increased staffing at stations, extra police and stricter penalties were needed to prevent more incidents of this sort.

What are we doing wrong as a society? What is happening to our community? Why is it so hard for our stationmaster Peter to maintain that sense of community at our station? Why have we learned to live with violence and fear and indifference? If this is happening now, today what will it be like tomorrow? Will it be complete anarchy? Jungle rules?

King hit |ki ng hit|, noun
A king hit, also known as a sucker punch is a common street fighting technique. Experts may feign fear or friendliness to put their opponent off guard or approach him from the side or rear to deliver a surprise blow. To guard against this, fighters may place their backs against a wall or issue an ultimatum against any close approach. The king hit may carry the added connotation that the blow is, as a rule, pre-empting a fight, and intended to cause as much damage as possible, and is usually aimed at a weak point such as the groin or kidneys.
Posted by Intelliblog at 01:33