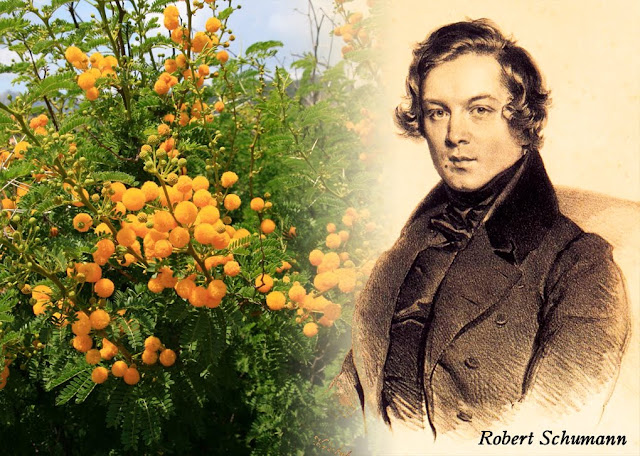 “And the night shall be filled with music,
And the cares that infest the day
Shall fold their tents like the Arabs
And as silently steal away.” - Henry Wadsworth Longfellow

Vachellia farnesiana, the needle tree, is the birthday plant for today.  It is a hardy tree with numerous thorns distributed along its branches, feathery leaves, and bright yellow, fragrant ball-like flowers like pom-poms. In the language of flowers, this plant symbolises “dangerous love”.

An Indian legend recounts how this plant originated: A falcon tried to steal soma (the drink of immortality of the Indian gods).  The falcon was wounded by one of the demons guarding the soma and thus it lost a feather and a claw, which fell to earth.  They sprouted forth and gave rise to plant with the feathery leaves, and sharp spikes, which bears the fragrant flowers reminiscent of the scent of the heavenly drink.

Cassie perfume is distilled from the flowers. Cassie absolute is employed in preparation of violet perfume bouquets, which are extensively used in European perfumery. Cassie pomades are manufactured In Uttar Pradesh and the Punjab.

In the northern hemisphere, this rhyme is said on this day:
If on the eighth of June it rain
That foretells of a wet harvest, men sayen.

Today is the 200th anniversary of Schumann’s birth, in 1810. Robert Alexander Schumann (1810–1856) was a German romantic composer. His wonderful solo piano music (such as the well known Carnaval and Kinderszenen) occupied him until 1840, when he began to turn to the orchestra and to songs. His orchestral works such as the Piano Concerto in A Minor (1841–45) and the Rhenish Symphony (1850) exemplify his mastery of classical forms but also show an emotional intensity that hint at his later nervous breakdown. An articulate and gifted critic, he championed younger composers such as Chopin and Brahms. His wife, Clara Josephine (Wieck) Schumann (1819–1896) was an outstanding concert pianist.  One of my favourite of his compositions is the Träumerei, Opus 15 N˚ 7.