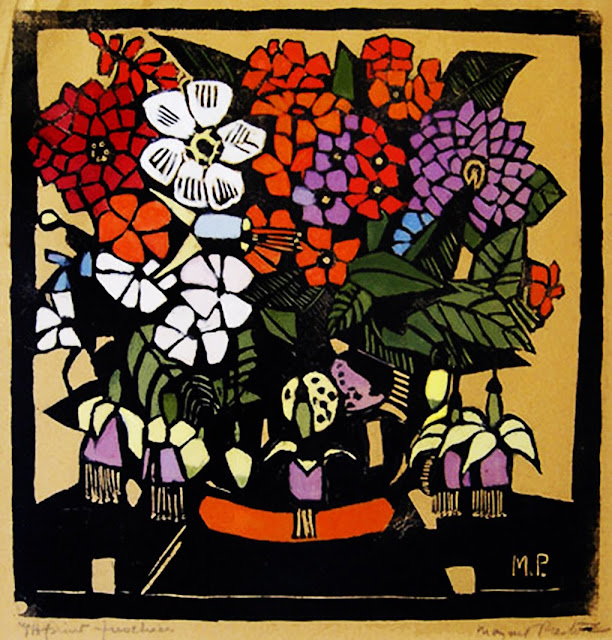 “The aim of life is to live, and to live means to be aware, joyously, drunkenly, serenely, divinely aware.” - Henry Miller

For Art Sunday today, the art of Margaret Preston (1875–1963). She was Australia’s foremost woman painter between the wars, who with her vital art sent a series of shock-waves through art circles. Not to mention her spirited journalism and her belligerent enthusiasm for living, during a career that spanned over seventy years. Her vibrant decorative paintings and prints of distinctively Australian subjects (especially flowers) have bewitched the Australian public since they were first exhibited in the early 1920s and made her one of the most well-known female artists.

Margaret Preston studied art in Sydney under W. Lister Lister, at the National Gallery School, Melbourne, and at the Adelaide School of Design. In 1904 she went to Munich to attend the Government Art School for Women, then going to Paris where she studied at the Musée Guimet and exhibited still lifes. After a brief return to Adelaide in 1907 she left again for Europe, working with disabled soldiers in Devon. In 1919, after returning to Australia by way of North America, she married William George Preston, a businessman, and settled in Sydney. The couple travelled extensively throughout Australia, the Middle East, Africa, Europe and the Pacific Islands.

Although well-known for her decorative still lifes, she was also a skilful wood engraver and linocut printer. Her prints featuring Australian native plants have become very valuable in recent years. She was a writer and lecturer of art, being a champion of and influenced by Aboriginal bark paintings. She was a member of the Society of Artists, the Australian Art Association and the Contemporary Group, Sydney. At the Paris International Exhibition in 1937 she was awarded a silver medal.

She was quick-witted and a lively writer on art and travel, an accomplished lecturer and children’s educator. She delivered her ideas in short staccato sentences, which could explain simply difficult ideas. In 1927 when Art in Australia devoted a complete edition to her paintings, prints and writings, she not only paid for additional colour illustrations, but also wrote an autobiographical essay with the provocative title “From Eggs to Electrolux”. However research by many art historians (which began in the early 1970s), has shown that what Preston wrote, did not always tally with fact. On her marriage certificate, for example, she reduced her age by some eight years, making herself slightly younger than her husband! Her autobiography was in essence an entertaining piece of fiction based on her life…

This is her “Fuchsias” from 1928. The print medium lends itself to her epigrammatic pictorial style and her bold, bright and mosaic-like colours. The flowers are jewel-like and look as though they have been cut precisely by a saw. The hues are harmonious and complement well the busy but well-composed arrangement. This is a piece of art full of joie de vivre and exuberance.
Posted by Intelliblog at 01:24